The Guaranteed Showy Samurai (極付派手侍, Kiwametsuki Hade na Samurai) is the twelfth episode of Kaizoku Sentai Gokaiger. It is also the second part of a two-part tribute to Samurai Sentai Shinkenger, which began with The Serious Rebellion.

Joe goes off to face Barizorg alone in an attempt to make him remember his past as Kaoru assists the Gokaigers in their fight against the Zangyack Empire.

When Joe mysterious leaves, the other crew members worry about their crewmate as Captain Marvelous tells them to leave him be as he is confident that he'll return. Remembering the events that led to him leaving the Zangyack and Cid, Joe finds Barizorg's sword as the cyborg arrives to reclaim his weapon. Though he heard the truth about his origins, Barizorg refuses and defeats Joe before taking his leave as the pirate sees his friend is truly dead. On the Gokai Galleon, Kaoru learns how Joe became a pirate before Deratsueigar returns to Earth to carry on Warz Gill's orders to slaughter the Gokaigers for hurting him. Though Kaoru offers to help, Marvelous turns her down as he and others fight the Gormin and Sugormin with the power of various Sentai warriors before Deratsueigar defeats them.

After having an realization, Joe arrives to help after Kaoru gives him a Secret Disc to even the odds. The gathered team assume the forms of the Shinkengers to battle Deratsueigar, with Shinken Blue using the Secret Disc to fight with two Shinkenmaru before the pirates finish Deratsueigar off with Gokai Slash. Enlarged, Deratsueigar proceeds to destroy the city before overpowering Gao GokaiOh. However, using the Shinkenger Keys, Gao GokaiOh reforms into Shinken GokaiOh. After taking down an entire platoon of Sugormin, Shinken GokaiOh destroys Deratsueigar. Later, their Captain collapses from starvation as everyone else carries him to a place to eat while Joe says it is good to be home under his breath.

Shinkenger
Add a photo to this gallery 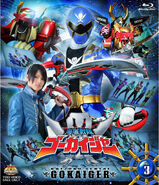 Retrieved from "https://powerrangers.fandom.com/wiki/Ep._12:_The_Guaranteed_Showy_Samurai?oldid=563883"
Community content is available under CC-BY-SA unless otherwise noted.