Later, he appeared on the edge of a building right in front of the two Patrangers. Once the duo transformed, Envy used the "Le porte-tempête/The storm holder" Lupin Collection's ability to safely float back down to the ground in order to battle them. During the fight, he tried to turn the two Patrangers young, but failed as they kept dodging them. However, when he got a chance to turn Patren1gou young, he was then knocked back by the arrival of Patren1gou and Patren2gou. Noel has successfully gained access to Envy's safe and"Le porte-tempête/The storm holder" Lupin Collection after that he was then taken out by PatrenUgou and Lupin X and everyone returned back to their rightful age.

However, Envy was enlarged by Goche Ru Medou, only to be destroyed by the Pat Kaiser Strong Biker's Pat Kaiser Thrust-Up Strike.

He thinks kids are easier to push around and really hates adults. 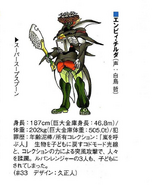