Engine Toripter (炎神トリプター, Enjin Toriputā) is Go-on Gold's partner, a red & gold hybrid of a chicken (niwatori) & a helicopter with a lively prankster personality who is a master in aerial dogfights. He is one of the two Wing Clan Engines who arrived at Human World before Speedor and the others.

With his rotor blades, he can perform the Toripter Patriot (トリプターパタリオット, Toriputā Patariotto) and he also attacks with the Missile Battery Out, firing a supply of bullets from his turrets. He is part of a pair with Engine Jetras. He can serve as an auxiliary arm for Engine-O, GunBir-O, and is the main right arm of Seikuu-O. He also forms the right shoulder for Engine-O G9 and G12, the left foot of Engine-O G7, and his tail forms the chestplate for Engine-O G7, 9 and 12, his rotors forming a part of G7's wingpack.

In the year 2018, ten years following the battle against Gaiark, Toripter and the other Engines were barred from entering Human World by the Isolation Barrier erected by Noizoon. Thanks to a breach in the dimensions caused by Kitaneidas, the Go-Ongers' partner Engines were able to enter the Human World and join the fight against the Eleki Clan Zontark, saving their human partners from the three Zontark members as Toripter reunited with Hiroto. Ultimately, the seven Engines combined to form Engine-O G7, which performed the 10 Years Grand Prix to destroy Noizoon.

Toripter's gender was a source of confusion. Some fans believed Toripter was female because the character was voiced by Shizuka Ishikawa, a female voice actor. The question was laid to rest in Episode 38; Shower Banki's attack affected only the male characters, including the Engines. The only Engine not affected by Shower Banki was Bear RV, which confirmed that Toripter is male. 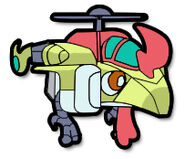 In the Korean dub Power Rangers Engine Force, he is named Tricopter.