Engine Speedor (炎神スピードル, Enjin Supīdoru) is Go-On Red's Partner Engine, a hybrid of a sports car and a condor. He can't be beaten when it comes to his speed and courage. He primarily attacks by spewing flames from his engine while dashing through foes in the Speedor Burst, and he can also "fly" by folding down his wings and deploying his "arms" to punch foes down. He is also very genuine, as he is true to his friends and most especially to his partner, Sosuke. He doesn't like letting Sōsuke down and often has to apologize for his actions, that essentially came with well intent. He forms the arms, head and upper torso of Engine-O, though for G6, 9 and 12 the arms devolve into shoulders only.

In episode 7, Bombe Banki rusted BearRV, Buson, and him He was stuck in his small form in episode 8, which didn't let the three main Go-Ongers fight Boring Banki. Sōsuke was unable to unrust Speedor and he became real sick. Sōsuke expected a miracle to happen, but it didn't.

Speedor endangered himself looking for his partner "walking" in his small form. Sosuke accepted there being no miracle and worked very hard to clean Speedor and Engine-O successfully defeated Boring Banki along with GunBir-O.

Some time after the end of Go-Onger and before Gokaiger, he and Bear RV get married and have a son, Machalcon. 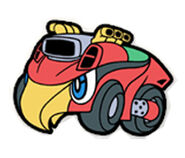 Speedor's Soul Form
Add a photo to this gallery

The Go-Onger Ressha is the Legend Sentai ToQ Ressha associated with the Go-Ongers, based on Engine Speedor. It can replace Red Ressha in ToQ-Oh to form ToQ-Oh Engine-O. It is currently exclusive to the toyline.

Having won sixteen of the Eyecatch races counting the shared win in the finale, Speedor comes 1st out of the five Engines.

Retrieved from "https://powerrangers.fandom.com/wiki/Engine_Speedor?oldid=993779"
Community content is available under CC-BY-SA unless otherwise noted.