Engine Kishamoth (炎神キシャモス, Enjin Kishamosu) is a hybrid of a mammoth and a diesel locomotive. He is split into two items when in storage, an Engine Cast and the number 10 Engine Soul. He forms Kyouretsu-O's torso, head, & arms, and Engine-O G12's lower legs, hip armor, backpack top, & helmet horns. His nose/smokestack spouts out freezing mist in his Ice Age Express (, Aisu Eiji Ekusupuresu), and his large size allows him to ram opponents with ease. His Ice Age Express can go so cold that it can temporarily turn the area around him into a frigid wasteland before returning to normal.GP 34: Devilish Woman

Appears in GP 32, with his fellow Ancient Engines, T-line and K-line, who can attach to Kishamoth during travel. In this linked form, its appearance made generations of people call them the "Gold Dragon", more so when it exerts its golden aura and dragon-like appendages.

Referred to as the "Ancestors" (ご先祖, Go senzo) with T-Line and K-Line, Kishamoth has a peaceful nature and tries not to be rough, and all three of them are as justice-run as their descendant Engines, seeing as they followed Horonderthal to "Dino World" (currently Human World). While initially all three of them did not like humans, they were moved by Speedor's words and Sosuke's passion. Because of his primitive origins he cannot talk, but he can speak only in mammoth-like roars, which can somehow be understood by the Engines and humans. 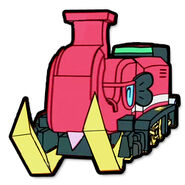 Retrieved from "https://powerrangers.fandom.com/wiki/Engine_Kishamoth?oldid=924111"
Community content is available under CC-BY-SA unless otherwise noted.