Engine Carrigator (炎神キャリゲーター, Enjin Kyarigētā) is an orange alligator and carrier truck hybrid who is of the Gian Clan, a clan that is isolated among the other Engines. His partners are Hanto and Gunpei. He has a samurai honorific persona, and he is also often blown up to be old & wise, as when confronting the Wing and Ancient Engines the main Go-Ongers went to him for answers but then came out disappointed due to his lack of them.

Being of the powerful and legendary Gian Clan, Carrigator can supposedly combine with all Engines, and do so without the need of a human partner. His large size makes him resistant to most Gaiark attack, and he can also chomp down on whatever gets near his mouth. He is also capable of lifting his midsection like a snake and maneuver his head for attacking and lifting those he's bitten, and he has the ability to carry two Engines (normally Birca and Gunpherd) and they can drive off the ramp on his head. He forms the main body of Engine Gattai GunBir-O and the feet of Engine-Oh G6, G9, and G12, as well as the helmet of Engine-O G6.

Carrigator went to Earth harboring the same goal as the main Engines: chasing down the Gaiark. He came from the Machine World and chased after Bompe Bankin. Bompe made the Go-Ongers believe Carrigator was on the Gaiark's side. The other Engines didn't know him at the time, and Carrigator attacked Birca and Gunpherd as he was unimpressed by them as well as their partners. Initially, he didn't want a partner nor did he want to join the Go-Ongers despite their shared goal, but once he witnessed the lengths the humans would go for their partners, he decided they were worthy of joining. Though he came on Earth to fight the Gaiark, he teams up with Gunpei and Hanto to understand the concept of "partner".

In the year 2018, ten years following the battle against Gaiark, Carrigator and the other Engines were barred from entering Human World by the Isolation Barrier erected by Noizoon. Thanks to a breach in the dimensions caused by Kitaneidas, the Go-Ongers partner Engines were able to enter the Human World and join the fight against the Eleki Clan Zontark. Eventually, Carrigator joined his fellow Engines with Jum-bowhale, when the Isolation Barrier was shattered. 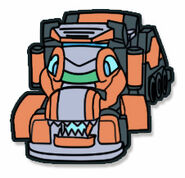