Engine Buson (炎神バスオン, Enjin Basuon) is Go-On Blue's Partner Engine, a hybrid of a bus and a lion. He is pure fiery force in contrast to Ren's intelligence. On his screen he can scroll various phrases such as "Stop" and "Go Go-Onger!". His large size allows him to ram through obstacles and foes, and he can also attack with Bus-on Missiles, where he lifts the compartments on his top to fire missiles. He can alternatively fire the Highway Fireworks, a blue laser beam from said compartments. He forms the hips and legs of all Engine-O formations.

He is featured prominently in the end credits of Go-Onger Episodes 9 and onwards.

In the year 2018, ten years following the battle against Gaiark, Bus-on and the other Engines were barred from entering Human World by the Isolation Barrier erected by Noizoon. Thanks to a breach in the dimensions caused by Kitaneidas, the Go-Ongers' partner Engines were able to enter the Human World and join the fight against the Eleki Clan Zontark, saving their human partners from the three Zontark members as Bus-on reunited with Renn. Ultimately, the seven Engines combined to form Engine-O G7, which performed the 10 Years Grand Prix to destroy Noizoon. 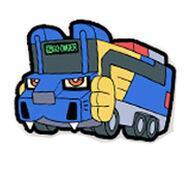 Having won nine of the Eyecatch races counting the shared win in the finale, Buson comes 4th out of the five Engines.