Engine Birca (炎神バルカ, Enjin Baruka) is Go-On Green's Partner Engine, a hybrid of an orca and a motorbike. He speaks a variety of words from English, Mandarin Chinese, French, Spanish, Portuguese, & Italian; he interjects a variety of these words at the end of his sentences (even when they don't make sense) such as "- bravo!", "- linguini!", and "-dalmatian!". He also says he is Latin. He is easygoing and he likes pretty girls, even wanting Saki as his partner first. He disobeys the rules often, and rushes into things without thinking them through first.

In battle, Birca uses his tail, the Bircutter as a weapon. Being part-motorbike, he is good at quick movements. He forms the main right arm for GunBir-O, Engine-O G6 and G9, the right ankle of Engine-O G12 and the left gauntlet of Engine-O G7.

He and Gunpherd head to Earth at the end of Ep. 3 and is used in his true form in Ep. 4. Birca explains the reason they were late was because they got lost.

Kegalesia steals his Engine Cast and he agrees to be Hanto's partner when he sees him fight Kegalesia.

In the year 2018, ten years following the battle against Gaiark, Birca and the other Engines were barred from entering Human World by the Isolation Barrier erected by Noizoon. Thanks to a breach in the dimensions caused by Kitaneidas, the Go-Ongers' partner Engines were able to enter the Human World and join the fight against the Eleki Clan Zontark, saving their human partners from the three Zontark members as Birca reunited with Hant. Ultimately, the seven Engines combined to form Engine-O G7, which performed the 10 Years Grand Prix to destroy Noizoon. 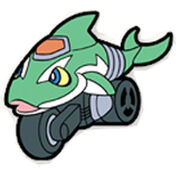 Having won six of the Eyecatch races counting the shared win in the finale, Birca comes 5th out of the five Engines.