Engine BearRV (炎神ベアールＶ（ブイ）, Enjin Beārubui) is Go-On Yellow's Partner Engine, a plucky hybrid of a bear and an RV (though she looks more like a buggy). She is a cheerful gutsy girly who will take on any challenge. She speaks by flapping her hood up and down. Often times, Saki calls her by the name "BearR" (ベアール, Beāru). She once showed interest in Jetras in Love Relationship. She really likes talking about guts, especially in her partner Saki.

Her spunky pep is due to her not being a picky eater, eating even enemy aircraft in her BearR Attack (ベアールアタック, Beāru Atakku), and she can attack with the BearR Press (ベアールプレス, Beāru Puresu), running over the enemy when they're already down, and the V V Missile (ブイブイミサイル, Bui Bui Misairu), fired when she exposes her "palate" (roof of the mouth).

TV STORY-GP 38: The Maidens' Sanctity According to her dad, the latter attack was unladylike. She forms the midsection of all Engine-O formations.

In Gokaiger, it is revealed that she married Engine Speedor and had a son, Machalcon. 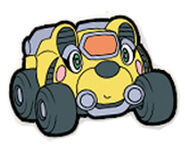 Having won thirteen of the Eyecatch races counting the shared win in the finale, Bear RV comes 2nd place out of the five Engines.