"I am invincible! And I have been waiting for this day of destiny. The dark sword, of which there is only one in the universe...Today, I will use it to end Ohranger!"
―Bacchus Wrath revealing his survival and swearing revenge on the Ohrangers.[src]

"Hysterrier...Buldont's modifications are complete. The rest...is up to you..."
―Bacchus Wrath's Head’s final words before his permanent death.[src]

Bacchus Wrath was one of many Machine Beasts created 600 million years in the past by the civilisation of Pangaea to serve and live alongside them. However when the machines rebelled against their masters, they were defeated and crushed by Riki, the legendary hero whose Super-Power was enough to help the civilisation defeat the machines. Bacchus escaped from destruction or captivity as its only mechanical survivor and spent millions of years rebuilding the machines, building a vast empire and many family members and servants on planet Baranoia. He looks down on humans and their fragile forms while he compares himself to the gods.

When Bacchus Wrath returned to Earth, he immediately set up a base for his forces on the moon, which Baranoia conducted non-stop assaults of the planet to force surrender. However when attacking Tokyo, he suddenly came across the forces of U.A.O.H. and their Ohranger unit, who repelled the Baranoia offensive and prevented their land from being taken by him.

TV STORY-Ep. 1: Invasion!! 1999 While continuously attacking to stop the Ohranger and take the planet, he becamefurther hindered when the Ohranger created their own giant machine in the form of the Ohranger Robo, which forced him to create new giant machines and even upgrade his Butlers Acha & Kocha to grow his Machine Beast army.

After multiple failures, culminating with an entire army of giant, magma-empowered Machine Beasts being crushed in a surprise attack by the Ohranger's new Blocker Robo and his own presumed death in the Trojan horse assault when the celing collapsed on him, Buldont, and Hysteria with them narrowly escaping.

However, Bacchus Wrath survived and finally grows giant size himself and summons a sword from the far reaches of space to personally deal with the Ohranger once and for all. Despite the haste of some members to try and finish off the Baranoia leader, the team ultimately learns a special technique from Chief Counsellor Naoyuki Miura, which they use in unison with their combined mecha, OhBlocker, to utilize the "Twin Blokken Crash" technique, ultimately appearing to destroy Baranoia's emperor.

However despite his supposed destruction, Bacchus Wrath survived in the form of his disembodied head, retreating to a laboratory on another planet in order to perform his final duty. After the "death" of his son, Buldont and the removal of him and his mother, Empress Hysteria from the planet by insurgent leader Bomber the Great, Bacchus leads his wife and son to this planet in order to grant Buldont his power, reforming him into Emperor Buldont out of his own love of family before his computer finally shuts down, bringing an end to Baranoia's first leader.

Emperor Bacchus Wrath is one of several past Super Sentai villains that appear in clips in the anniversary special Hyakujuu Sentai Gaoranger vs. Super Sentai.

Emperor Bacchus Wrath was voiced by the late Toru Ohira, who was best known as the voice of the 2nd narrator of the entire Super Sentai franchise from episode 15 of Gorenger through the finale of Dynaman, as well as Zyuranger. His suit actor was Yasuhiro Takeuchi. 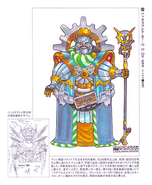 The full Japanese name of Bacchus Wrath, "Bacchus Hund", is a pun on the dog breed "dachshund" as well on the Roman god Bacchus.

Retrieved from "https://powerrangers.fandom.com/wiki/Emperor_Bacchus_Wrath?oldid=1049947"
Community content is available under CC-BY-SA unless otherwise noted.