Emma Goodall is Megaforce Pink, the Pink Ranger of the Mega Rangers.

Emma was taking photos of butterflies and insect life when she came upon Creepox at the edge of a forest. To her surprise, she was teleported to meet Gosei and asked to become the new Pink Ranger.

Later Gia and Emma were turned into worst enemies by Beezara. Even at battle against Beezara, the two still fought each other. When Gia and Emma were reminded they were friends, they managed to break free from the spell. Then along with the other Rangers, they defeated Beezara. As a result, Emma gained access to the Sky Brothers Zord.

In Harmony and Dizchord, it is revealed that she has a beautiful singing voice that she gets from her late mother, and when she sings, the song reminds her of her mother and then nature around her. With the help of Troy, she uses her singing to counteract Dizchord's attack.

Later, she gains the power of Ultra Mode along with the other Rangers. At some point when she was trapped in the dream world, she showed her optimistic side telling the others trapped to never give up on their dreams.

Even later, she befriends Rico the Robot, a robot created by Metal Alice that malfunctioned. Even after Rico's memories were erased by Metal Alice, Emma vowed to save him, which she did.

While X-Borgs invade Ernie's Brainfreeze and only Ernie is still there, Megaforce Pink comes to save him. Later, she returns to the Command Center to receive her new Super Megaforce powers along with the other rangers.

Jake and Emma go see the former Red Jungle Fury Ranger to learn how to channel their inner animal spirits in order to defeat a monster with powerful magnetic abilities.

When the Megazord is damaged in a fight against a monster who uses his staff to steal human's happiness, Emma uses unconventional methods to defeat this unusual monster.

When events set into motion by Lord Drakkon caused the timeline to split into pocket universe, each anchored on a powerset, the Mega Rangers were split off into their own pocket universe.

COMIC STORY- Mighty Morphin Power Rangers 2018 Annual Her Gosei Morpher was later seen at Drakkon's lair, concluding that she may been captured by Lord Drakkon.

When the timeline was restored, so was Emma.

Emma along with the other Megaforce Rangers as well as their Super Mega Mode are among all the Ranger teams which appear in the Korean-developed mobile game Power Rangers Dash. 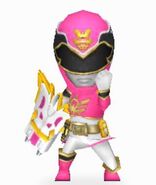 The Megaforce Rangers as seen in Power Rangers Dash.

Emma Goodall is totally in tune with nature, and always on the lookout to protect the environment. She’s been best friends with Gia since they were little, despite their different personalities. She enjoys BMX bike riding and photography in the Harwood Forest, as well as singing. Like Kimberly, Emma speaks in a valley girl accent and is very feminine. Emma has an easy-going attitude and a very positive personality. She always tries to block out negative vibes with positive ones. She's a big dreamer and enjoys to see others happy.

As Megaforce Pink, she has a Phoenix motif. She pilots the Phoenix Zord. Pink Ranger's main weapon is a laser called the Phoenix Shot that resembles a shield. She uses cards with her Gosei Morpher.

Ultra Mode is the Mega Rangers' power up.

In Super Megaforce, Emma and the other Mega Rangers will gain the Super Mega Mode which allows them to morph into the past Rangers that have preceded them.

This form is exclusive to SM Episode 10.

This form is exclusive to SM Episode 11.

This form is exclusive to Episode 5.

This form is exclusive to Episode 5.

This form is exclusive to SM Episode 4.

This form is exclusive to SM Episode 1.

This form is exclusive to SM Episode 1.

The Megaforce Pink Ranger Key is one of Emma's personal Ranger Keys. This key along with the majority of the Core Ranger Keys are seen lining the Command Center's interior walls. This key is mainly used by Emma Goodall (Super Megaforce Pink). Although it hasn’t been seen being used, it has been seen in the toyline.