"So delicious it seems.......I will be eating this dream of yours!"
―Elmgaim of the Baku's first words.[src]

Originally only able to eat the dreams of those asleep, Elmgaim gets a power boost from the Erurei Box that enables him to eat souls as well, leaving his comatose victims in despair while growing roots that would rot the planet. While partaking victims, he eats the "dreams" of Gosei Pink, forcing Eri into the same despair state and dream world as his other victims. However not too long after she is eaten, Eri breaks free from the ability by making a new dream, removing the roots but preventing her soul from escaping. Seeing Eri as capable of dealing with Elmgaim from the inside even as Gosei Knight tries to remove the roots directly, the Goseiger use her various Expandream cards she wrote for an upcoming Gosei Festival to lure Elmgaim into fighting them instead of her while she continues to inspire the desparing people within the internal world. After overwhelming the Yuumajuu with too many dreams, he bursts all of the captured people's souls and restores Eri who rides to the rescue with Gosei Knight. Becoming Super GoseiPink, she and Gosei Knight combine their finishers into a "Super Sky-Knight Dynamic" which destroys Elmgaim.

After growing through the Bibi Bugs, the Goseiger form Sky Gosei Great alongside Gosei Ground, where they strike Elmgaim with wind attacks before becoming Ground Gosei Great and finishing him off with the Ground Great Strike.

In his basic form, Elmgaim merely eats the dreams of sleeping people, while using a fork as an offensive weapon and a sheet he uses like a bullfighting cape. However after partaking in the power of the Erurei Box, his dream-eating now can exist to anyone within the waking world, making them fall flat on the ground planting roots that ultimately suck away at the Earth, making it rot into collapse. All of his offensive skills are likewise increased with this power. 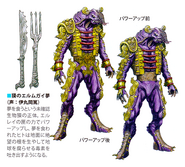 Elmgaim of the Baku Concept Art