RangerWiki
Register
Don't have an account?
Sign In
Advertisement
in: In Space, PR Monsters, In Space Monsters,
and 2 more

When Push Comes to Shove

Elephantitan headbutted and knocked off a tall building in attempt to knock over Professor Phenomenus' plutonium fuel that was in a lab. He also endangered Cassie and Lenny by attempting to topple the building they were inside of. He was destroyed by the Astro Megazord. 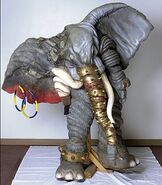