Waldo "Dustin" Brooks is the Yellow Wind Ranger of the Ninja Storm Rangers.

Dustin is the "comic book geek" of the Wind Rangers and was a fan of previous Rangers, who were considered urban legend by ninjas. He is somewhat naive and gullible but has a heart of gold. Dustin can also be described as a "dudebro."

He has extreme skills with motocross, and works at the bike store Storm Chargers.

In the beginning of the series, before becoming a Ranger, he was at the low end of the class at the Wind Ninja Academy. When Lothor captured the academy and its students, Dustin was of the three remaining students left.

TV STORY-Prelude to a Storm

Early on, his teammates questioned his dedication when he spent too much time with Blake and Hunter Bradley, who turned out to be the evil Thunder Rangers. Dustin proved himself worthy of being a Ranger again and again.

Dustin was happy when Blake and Hunter turned out to be allies and welcomed Cam to the team as the Green Samurai Ranger.

Dustin thought Marah, Lothor's evil niece was turning good and trusted her to help the team defeat Lothor. She ended up betraying him and Dustin felt used, though she seemed to truly develop feelings for the Yellow Ranger.

On one instance, Dustin switched placed with Sensei on accident. Luckily, it was temporary.

Dustin, along with Shane and Tori found out that they were destined to take place in an ultimate battle with Lothor. He used his Earth powers to expel Lothor to the Abyss of Evil (after Lothor took his Ranger powers). Dustin then graduated from the Wind Academy and stayed on as an instructor.

By the end of the series, Dustin has grown and matured a lot but his personality remains much the same.

After almost a year, when Lothor finally manages to escape the Abyss of Evil. Meanwhile, after beating their students, Tori, Shane, and Dustin find a message from "Sensei" telling them where to meet him.

The Ninjas meet with Sensei to discover that Lothor has returned. When he gives them new Wind Morphers, they are put under an evil spell. Dustin becomes evil alongside his teammates. It turns out to be Lothor who has captured Sensei and now plans to use the Wind Rangers for his evil plan.

The Wind Ninjas don't stand a chance against the Wind Power Rangers. As a result Lothor bottles up the Wind Ninja Students and leaves the destroyed Ninja Academy.

In Lothor's hideout, Elsa has come to deliver a message from Mesogog to Lothor and his Army including the Wind Rangers.

In the Hubble Bridge, the Wind Rangers show up and give a wind attack to the Dino Rangers. Starting the battle and during the fight, due to that Ethan use his Tricera Skin given a difficult time to Dustin and using his Underground Movement to trick and unexpectedly attack Ethan, while each one finished using their powers. Dustin continues fighting against Ethan. When Dustin and his teammates were about turned into their Ranger forms, Hunter, Cam, and Blake join their comrades against the Dino team in battle, cheating that they also joined Lothor's Army. But they trick them into taking the right Power Discs, which reverses Lothor's spell, Dustin and his teammates return back to the good side.

Back at the Dino Lab, Dustin and the other Rangers listening on how Hunter, Blake, and Cam explain that Sensei came to their rescue just in time. All the Rangers are ready to take down Lothor. Tommy and Sensei remind them that this won't be easy and they will have to try their best.

The Dino Lab's screen shows Lothor and Mesogog's army, deducting that Lothor forms an alliance with Mesogog, all the Rangers going to the battlefield.

The Ninja Rangers and Dino Rangers morph into their Ranger forms and prepare for the battle. Dustin with his teammates and the three main Dino Rangers riding their motorcycles attacking Lothor and Mesogog's forces. When he and the other Rangers are riding their motorcycles, Dustin team up with Ethan to destroy Bald Loser, later all the Rangers destroy Lothor's bodyguards.

He is shown on the screen of the viewers registered database. Dustin in the archive footage as the Yellow Wind Ranger is seen during the morphing sequence with his fellow Wind Rangers, while Rex Ranger is learning the 1 new movements to Matt and Trevor.

Dustin along with the other Ninja Rangers and other Ranger teams are seen in Troy's premonition about the Legendary Battle.

After the apparently death of Vrak, Dustin is seen briefly with the other Rangers in Troy's premonition about the Legendary Battle.

Emperor Mavro was defeated, but the remaining thousands of X Borgs still stand. Tommy gathered all the existing Power Rangers, Dustin returned with his fellow Ninja Rangers and his powers are somehow fully restored, as part of the army of Legendary Rangers led by Tommy that helped the Mega Rangers defeat the Armada once and for all, fighting in a huge battle against hundreds of X Borgs and dozens of Bruisers. After the demise of the X-Borgs, Tommy shook hands with Troy and teleported off along with Dustin and the Legendary Rangers.

Dustin ventually received Zordon's call through the Morphin Grid and was among numerous Rangers who rallied to his pocket dimension led by the Quantum Ranger for the last stand against Lord Drakkon, reunited in the Command Center.

Dustin along with the other Rangers have their Morphers upgraded by Doctor K, while the other Rangers ugraped their Morphers, he take this opportunity to meet Jack Thomas the Hyperforce Yellow, showing him his Lion Hammer. Dustin also say to him that his Liom Hammer can make earthquakes, he along with the other Ninja Rangers drive the Thunderstorm Megazord and prepared among other Rangers to teleport on the moon of the World of the Coinless for the fight against Drakkon against his Ranger Sentries, led by Jason Lee Scott.

During the battle on the moon of the World of the Coinless, Dustin and the rest of the Ninja Rangers (except Cam) driving the Storm Megazord they grouped with the other Rangers piloting their respective Megazords; Wild Force Megazord, Dragonzord Battle Mode and Shogun Megazord as they confront the evil Zord Serpentera. However, they are killed by the evil Zord.

Dustin's timeline was later restored by the Mighty Morphin Rangers after they defeated Drakkon.

Due to their Ninja training, The Wind rangers have several special powers common to ninjas, them being:

As the Yellow Earth Ranger, Dustin has ninja powers of Earth. As such, he is capable of fighting underground and moving through the earth. He can also split into two fighters. 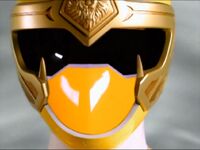 A female version of the Yellow Wind Ranger as seen in Super Megaforce.