Ep. 23: The Knuckleball of Infatuation

""Take this!""
―Dora Pixie when throwing a large ball at Gouryuuzin and his final words before his death.[src]

Dora Pixie (ドーラピクシー, Dōra Pikushī) (23): A unicorn-horned boy with fangs in a baseball uniform. He assumed the form of a young boy in order to confuse his enemies

The legends state that Dora Pixie was part of a group of cupids that had used their abilities to encourage romance between humans. Among their number was the mischevious Pixie who angered God and was banished to Earth.

Millions of years later, Dora Pixie was created when Bandora was inspired by the renewed romance between her minions Grifforzer and Lamy and needed a creature that could weaponize love. Disguised as a young boy, Dora Pixie was sent to Earth. There the creature used his magic baseballs to force people to fall in love with each other. Dora Pixie particularly targeted children, making a group of boys obsessed with a girl named Satoko.

Dora Pixie's magical baseballs enthralled his victims until his horn was cut. This caused those affected by the spell to regurgitate the love balls. Without his horn, Dora Pixie appeared incapable of creating more of these balls, but could still emit gas that had a similar effect from his horn. Upon his destruction, all those remaining under Dora Pixie's power were freed from his spell. 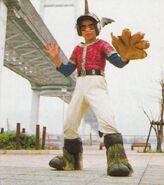 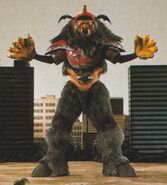 Retrieved from "https://powerrangers.fandom.com/wiki/Dora_Pixie?oldid=902025"
Community content is available under CC-BY-SA unless otherwise noted.