Doomwing was the evil counterpart and other half of Zenowing who served as one of the two generals of Lord Arcanon alongside Singe. He served the the titular main antagonist of the episodes "Silver Secret" and "Wings of Danger."

Doomwing morphs into the Silver Ranger to pose as Zenowing and makes contact and gains Kendall Morgan's trust by seemingly helping the Dino Charge Rangers with finding out where the Titano Zord is located. The message pod is then destroyed by Singe in order to avoid Heckyl and the Rangers getting suspicions about his true intentions.

After the battle with Beauticruel, the Rangers receive another call from the Silver Ranger where Doomwing seemingly asks the Rangers for help but they lose the connection.

After the battle with Leisure and Loafer, the Rangers have a discussion with the Silver Ranger who tells them that the Dark Energem has been discovered. Kendall is then told by the Silver Ranger to give out the information about the Zords and Chargers, much to the purple Ranger's skepticism. She nevertheless, gives out the database to him which turns out to be the Rangers' downfall. He then begins using these data to make replicas of the Dino Chargers for his master to use.

Though Arcanon easily overpowers Heckyl, Snide proves more of a challenge and overwhelms them in battle while inside his personal Megazord, Fortress. It is at this instant that Doomwing reveals that he can summon the Zords as well, shocking the Rangers. When it is clear Fortress is too much to handle, they retreat, and the Rangers take over the battle. Later, he stands beside his partner as they are told by their master they must take the Energems no matter what.

When the Rangers find that the Silver Ranger is on Earth, they rush to the spot from where they have received the signal. Doomwing morphs into the Silver Ranger and appears before them while pretending to be injured. He tells them he was captured by Lord Arcanon and was forced by him to create the Dino Chargers. He says he has managed to escape and bring all of the nine Chargers which he has made. Riley doubts this, as he had found the Titano Charger left by Arcanon on the road. Exposed, Doomwing then reveals his true evil intentions and attacks the Rangers, with his strength being overwhelming. Just as he is about to make the final strike, he loses control and demorphs into his true form. He then gets taken over by Zenowing, who tells the truth: sometime after he bonded with the Silver Energem, Arcanon fuses his body with Doomwing's through the Dark Energem to obtain the Silver Energem. Zenowing reveals that since Doomwing has stored the Energem in his sword, only he can morph into the Silver Ranger with the help of his bonded soul. The true Silver Ranger starts losing control and warns the Rangers to move away to safety as Doomwing starts to take over.

Doomwing returns and attacks Tyler while planting a listener on his Dino Com before fleeing away. The Rangers return to their base and to prevent the villains from listening in on their conversation, carefully placed the device under a waterfall-like structure in a glass tank, before working on their plan to separate Doomwing and Zenowing by using the Split Emitters, four pyramid-like devices which when placed in a square formation, will concentrate a beam of energy at the center to separate the fused objects. They then arranged them in the correct positions and tell their fake plan in order to be listened by the villains. Doomwing arrives on the scene and confronts Tyler, thinking he is alone. After a fierce duel, he starts losing control and Tyler tells his friends to start the process. The Split Emitters fire energy from four directions, concentrating at the transforming Doomwing. The two get separated, which infuriates Arcanon, who fires the Magna Beam at Doomwing to enlarge him. The Rangers form the Dino Charge Ultrazord and with the Titano Cannon Final Strike, manage to defeat him. However, Doomwing survives the battle with the Silver Energem still in his possession and manages to make his escape. He returns to the ship, but Arcanon is disappointed with him since though he still has the Silver Energem with him, he is rendered unable to morph due to the separation between him and Zenowing, no matter how hard he tries. Arcanon angrily says that, when he could become the Silver Ranger, he was of great use to him, but now that he cannot, he is of no use at all. He exits, leaving Doomwing down and depressed.

Doomwing requests one last chance from Arcanon before he destroys him. Arcanon agrees and gives him the Silver Energem. He, along with his companions, goes to confront Zenowing and battles with him. Doomwing gets the upper hand and is almost about to finish off Zenowing, just when Riley valiantly jumps in to save Zenowing. Doomwing injures Riley badly. Keeper arrives and saves all the rangers. Arcanon warns Doomwing that he better get hold of Zenowing otherwise, he shall destroy him himself.  Back in the lab, Kendall analyzes the wound but she says that she has no idea if Riley shall become alright as she has never seen such a type of wound. Zenowing blames Riley and says it was his fault that he got injured. The rangers are annoyed by this remark and Tyler points out that Zenowing is still alive, thanks to Riley. All the rangers leave the base. Keeper talks to Zenowing and makes him understand the realization he is currently experiencing. He says that as Doomwing veiled his true emotions, he doesn't have gratitude and somehow has lost his true self.

Meanwhile, in the ship, Doomwing orders Wrench to go on making more monsters so that they can keep the Rangers busy while he fuses with Zenowing again. However it is revealed that none of the monsters can speak. Doomwing complains but Wrench points out that it is impossible to create perfect monsters in such little amount of time. He then sends them to keep the Rangers busy. After Zenowing helps Riley with his wound and gives him his special abilities, he leaves and approaches the forest. He senses the presence of the Silver Energem. Doomwing shows up and he is able to copy every move of Zenowing. Zenowing gets captured and Arcanon is about to merge Doomwing and Zenowing using the Dark Energem. Riley wakes up, sensing that Zenowing is in deep trouble. He can now see through Zenowing's eyes. Riley rushes to the forest after showing Kendall that his wound has healed. He stops the fusion process using the Green Prism Slash, the one Zenowing told that he could not master. The Dark Energem falls far off then Fury and Singe go looking for it. Arcanon wants to destroy Doomwing for his failure but the Rangers arrive to destroy them both. Arcanon flees, leaving Doomwing to Zenowing's mercy and the Rangers. Doomwing tries to flee but is stopped by Tyler while the other Rangers fight the re-animated monsters, as well as Tyler soon after. Zenowing fights him and gets back his Energem. He morphs and after a fierce battle, Doomwing tells him that Arcanon would crush him in spite of his demise. Zenowing then kills him by paralyzing him with the Silver Prism Slash and finishing him off with the Titano Saber Final Strike. As Zenowing relaxes, Doomwing slumps to the ground and explodes.

Due to his incompetence and utter failure, Lord Arcanon decides not to enlarge Doomwing for a second time.

Doomwing was a proud, confident, and ruthless villain who was extremely sure of his strength though not without cause as he proved to be one of the toughest opponents to the Dino Charge Rangers much like Singe before him. Doomwing was also a very convincing impostor of Zenowing as he took on the Silver Ranger persona, which gave him the ability to manipulate the Rangers into giving out very important information about their Zords and Chargers. After the revelation about his true identity to the Rangers as Riley had pointed out the one flaw in his claim about being forced to make the Dino Chargers when one of them was left by Arcanon, he was shown to be as maniacal as he could get as he attempted to assassinate the Rangers. Doomwing not only was good at impersonating his other half, but was also shown to be able to slip in a listening device on Tyler in an attempt to counter the Rangers' next plan, thus making him more of a trickster as well.

Nevertheless, he took deeply into consideration the opinion of his master, Lord Arcanon, as to how valuable he is. This was shown when he is hit hard by the fact Arcanon only considered him worthy and of use when he could morph into the Silver Ranger, and becomes depressed as a result, suggesting he had a dark heart, but at least superficially, like Zenowing's noble one. As time goes on after his third failure however, he was totally betrayed by the master who had created him and fought for by being left to get destroyed by the Rangers. Because he was Zenowing's evil half, he had a huge contempt for Zenowing due to knowing fully well that he would later be his undoing. The only reason he valued Zenowing was that he needed him to be able to morph into a Ranger by re-fusing with him. 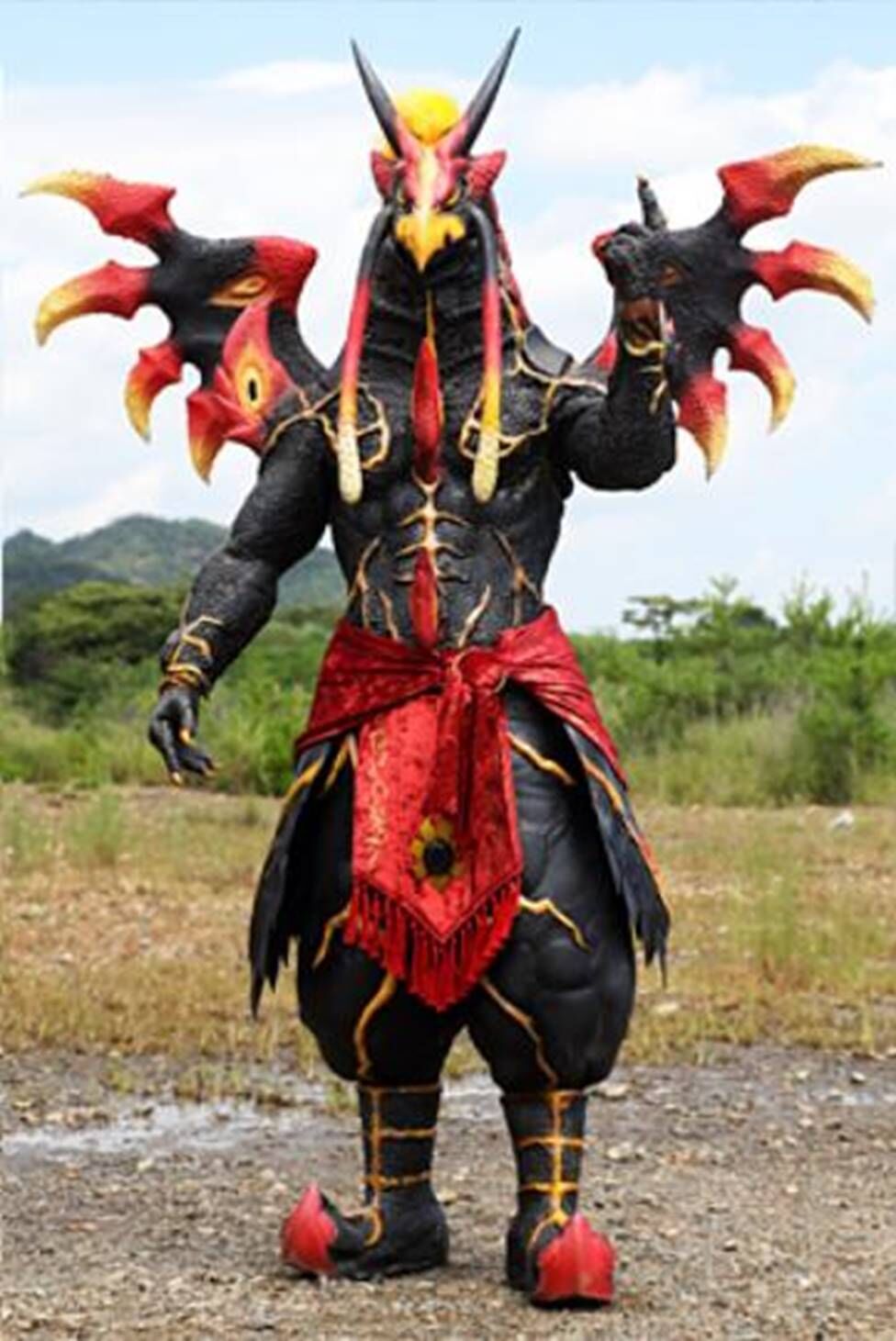