When Marvelous takes control of Dai-Zangyack and leads them in battle against Kamen Riders, Don and Joe join with Daiki Kaito (Kamen Rider Diend), who is looking for Marvelous' treasure, and Hina Izumi, a friend of Eiji Hino (Kamen Rider OOO), in finding out. They eventually meet the crew of the time-travelling DenLiner

The Gokaigers returned to Earth in a quest spearheaded by Captain Marvelous with the goal being the treasure inside the Link Cube. As Marvelous acquired the treasure personally while Gai arranged for the legendary Sentai that had emerged since their initial departure to provide their Ranger Keys to assist them in battle, Don and the others were sent to provide a distraction, guided by Navi into a confrontation with the four Zyuman members of the 40th and current Super Sentai, the Doubutsu Sentai Zyuohger. Engaging the Zyuohgers so as to stall them, Gokai Green fought Zyuoh Lion one-on-one followed by his counterpart, Zyuoh Elephant. Finding themselves overwhelmed by the Zyuohgers' Instinct Awakened modes, the Gokaigers selected from the Ranger Keys of recent years that Gai had acquired in order to turn back the tide of the battle, with Gokai Green Gokai Changing into his counterpart from the Ressha Sentai ToQger.

Gokai Green appeared with his team among the first 38 Super Sentai whom collectively empowered Wild Tousai Shuriken King in its fight against the titanic Gillmarda, granting the Ninningers and Zyuohgers the power to perform the Zyuoh Ninnin Super Sentai Burst which destroyed Gillmarda with the combined power of all 40 Super Sentai.

Don is a pacifist who causes trouble because he wants to avoid fighting. When frightened, Don will cower behind either Luka or Joe, sometimes even Ahim. He most often hides behind Luka, often resulting in an elbow to the stomach.

Don starts as one of the weaker Gokaigers, mostly relying on pistols to shoot enemies without stopping. After meeting Jan Kandou, however, he begins to take physical training more seriously. For example, while at first he was incapable of holding Marvelous' gold bracelet without both hands or throwing a dart with it on, he eventually is shown playing darts with little difficulty while wearing it.

Don, Ahim, and Gai are less single-minded about the treasure than their teammates and are more likable to other Sentai members, such as the Hurricanegers and Ninjaman.

Gokaiger had two video games released during its run, Super Sentai Battle: Ranger Cross and Kaizoku Sentai Gokaiger: Gathered Transformation! 35 Sentai!. Gokai Green appeared with his team in both of them. 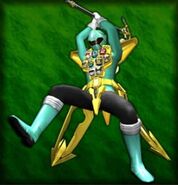 Gokai Green is among the vast pantheon of Rangers which are available in the mobile game Super Sentai Battle Base.

Gokai Green appears with his team among all Sentai in the mobile game Super Sentai Legend Wars.

As one of the weaker Gokaigers, Gokai Green relies on cunning and ingenuity over power when battling Zangyack, having invented the tactic of the Gokaigers trading their weapons with each other to better suit their abilities. Preferring ranged over melee combat, Gokai Green will usually trade his Gokai Saber for Gokai Yellow's Gokai Gun which he wields alongside his own to wildly spray enemies with a hail of bullets. When performing a Gokai Change, he usually transforms into previous Green or Black Rangers.

As a Gokaiger, Gokai Green has access to the powers of any ranger. While there's the obvious preference for green or black, he has also been seen using other color rangers' suits and powers.

.
This form is exclusive to Kaizoku Sentai Gokaiger vs. Uchuu Keiji Gavan: The Movie

As shown in cards, Gokai Green, along with the other Gokaigers, can use Gai's Gold Anchor Key to become Gokai Green Gold Mode. However, as it is Gai's key, Gokai Green's Gold Mode is identical to GokaiSilver's Gold Mode, with the 15 Sixth Rangers rather than his 33 counterparts.

Cross Armor Mode is a special armament form accessed by using the Gokai Galleon Ranger Key. This form grants Gokai Green armor in the likeness of the Gokai Racer.

This form is exclusive to Episode 27 and Kaizoku Sentai: Ten Gokaiger

The Gokai Green Ranger Key (ゴーカイグリーンレンジャーキー, Gōkai Gurīn Renjā Kī) is Don's personal Ranger Key which allows him to transform into Gokai Green. Whereas the keys of the 34 Sentai were created out of the sacrifice of their powers in the Great Legend War, the origin of the Gokaiger Ranger Keys is unknown, though it can be assumed AkaRed had a role in their creation.

This Ranger Key was turned into a Ranger puppet once, by Basco. Along with the other Gokaigers bar an incapacitated Marvelous, Don confronted and defeated the puppet Gokai Green.

TV STORY-Ep. 5: Judgement Pirates This is then raised even further to Z=5,000.

TV STORY-Ep. 39: Why? We're High School Students And again to 300,000, boosted due to his part in slaying Damaras, which is the same amount as Gai's bounty.

Don Dogoier is portrayed by Kazuki Shimizu (清水 一希, Shimizu Kazuki). Prior to the series, Shimizu specifically said he wanted to be TimeGreen but not just because he liked Timeranger; his family was friends to the family of Masahiro Kuranuki, who portrayed Sion (the very first alien Sentai hero and another Green), and he wanted to do it in honor of him. Kazuki Shimizu also appeared as himself in A Day of One Hero, a mockumentary centering around his role as Don.

In the Korean dub of Gokaiger entitled Power Rangers Captain Force, which aired in South Korea, Don as with the rest of the first five Gokaigers keeps his name (likely because they are not from Earth and thus don't have normal Japanese names), while his Ranger designation is Captain Green.