Domon (ドモン, Domon) is TimeYellow (タイムイエロー, Taimu Ierō) of the Timerangers. A 22 year old (33 in Gokaiger) womanizer who was formerly a professional MMA grappler that tends to overdo it in most situations.

Domon was born in the year 2977 on December 28th, a Capricorn with Type O blood.

Domon was banned from professional fighting for never being on time for a match because he would chase after girls. Despite this Domon has a great respect for the rules and after learning that Sion is an orphan sticks up for him and refuses for anyone to call him an alien.

However, Domon who comes from a large family is the only one who truly misses the 30th century and had some resentment towards Ranger Captain Ryuuya Asami for trapping them in the 20th century which he took out on Tatsuya Asami when they first met due to his resemblance to Ryuya. Although Domon works as the self-defense teacher at Tomorrow Research, he never got any students. Domon also argues with Ayase frequently due to Ayase's deadpan sense of humor and how he responds towards Domon's views towards women. However deep down he does care about Ayase, as Domon did not want Ayase to fight anymore after learning from Tatsuya about Ayase's illness as he was concerned about his health only for the two to get into a fistfight to which the others have to restrain them to which Domon shows his true emotions, ultimately agreeing to allowing Ayase to remain on the team.

Later on Domon falls in love with Honami Moriyama, a camerawoman, and after his secret identity is revealed to her, the two started dating and Domon eventually told her that he came from the 30th century. In the finale, after the future is changed Domon learns that his ban became a one-year suspension from the ring.

A copy of TimeYellow was part of a Copy Timeranger team that fought the Timerangers in a pocket dimension.

TimeYellow is among the Sentai warriors seen in clips when Gouki (GingaBlue) lectured Soutarou Ushigome (GaoBlack) about the past Sentai strong warriors, humbly claiming to not be nearly as strong as they are.

Years later, Domon fought alongside not only his own team, but every single Sentai ranger in existence, against the Empire of Zangyack when it attacked the Earth in the Great Legend War. After fighting against hundreds of Gormin and their Zgormin commanders. Kaijou noticed the fleet moving towards them, he gathered all the Rangers together and gave them the order to sacrifice their powers to wipe out the first invasion's armada. The TimeYellow powers are later used by Luka Millfy via the Ranger Keys.

The Future is the Past

In Kaizoku Sentai Gokaiger in episode 40, Domon sent a message to the past using Gai Ikari's GouJyuDrill and a Timeranger badge to send the heroes on a mission in the past connected to another crossover battle: the protection of a shrine destroyed in a battle between the Shinkenger and Goseiger against Gedoshu remnants that ultimately contained the jar of Kakuranger ally Ninjaman. Through this event, he discovered that he had fathered an illegitimate child with Honami, who was born after the events of Timeranger.

After the Zangyack's final defeat, Marvelous returned the Ranger Keys to their original owners. It is assumed Domon and his team have their powers once again, and will resume their duties as Timeranger. But it is unknown how the four main Keys made it to the year 3000.

TimeYellow appeared with his team among the first 38 Super Sentai whom collectively empowered Wild Tousai Shuriken King in its fight against the titanic Gillmarda, granting the Ninningers and Zyuohgers the power to perform the Zyuoh Ninnin Super Sentai Burst which destroyed Gillmarda with the combined power of all 40 Super Sentai. 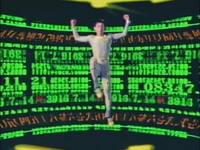 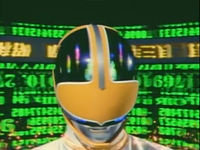 The TimeYellow Ranger Key (タイムイエローレンジャーキー, Taimu Ierō Renjā Kī) is Domon's personal Ranger Key and what became of his powers after he along with the rest of the 34 Super Sentai sacrificed their powers to end the Great Legend War.

This key along with the majority of the Ranger Keys were collected by the Red Pirates and later used by the Gokaigers. The TimeYellow Ranger Key was mainly used by Luka Millfy (Gokai Yellow), who used it to fight as TimeYellow.

The Timeranger keys, along with all the Ranger Keys of the first 33 Super Sentai, were briefly taken by the Black Cross King and turned into Ranger puppets that were fought by the Gokaigers and the Goseigers. Splitting up, the puppet TimeYellow was defeated as part of a group of surviving Yellow warrior keys by Gokai Yellow and Super Gosei Yellow.

After Zangyack were finally defeated, the Gokaigers gave the Ranger Keys back to their rightful owners. Domon received his key and became TimeYellow once more.

A female version of TimeYellow in Gokaiger.

TimeYellow is among the vast pantheon of Rangers which are available in the mobile game Super Sentai Battle Base.

TimeYellow appears with his team among all Sentai in the mobile game Super Sentai Legend Wars.