Path of the Rhino

"With the power of a rhino. Jungle Fury Rhino Ranger!"
―Dominic's roll call.[src]

"His parents weren't really around, didn't seem like anybody cared about him. He wasn't a bad guy though."
―Dominic talking about Jarrod[src]

Dominic used to be a Pai Zhuq student, on the academy he became friends with Robert "RJ" James and was the roommate of Jarrod. Being one of the best students, Dominic was almost chosen to be a protector by Master Mao but, due to his "curious streak", he wanted to see and do everything, so Master Mao sent him out to find his path in life.

After six years, Dominic returns to Ocean Bluff and catches up with RJ only to be dismayed to learn that Jarrod has fallen to Dai Shi. The Jungle Fury Rangers are put off by his goofball and silly personality, but he shows himself to be formidable when he intervenes in the fight between the Rangers and Crocovile as the latter is overwhelming the Rangers. RJ then produces a bracelet which turns into the Rhino Morpher as Dominic's Rhino Spirit makes him extremely powerful. Harnessing his Rhino Spirit, he morphs into the Jungle Fury Rhino Ranger who easily overwhelms and destroys Crocovile at which point he joins the Jungle Fury Rangers. After this, he joins Jungle Karma Pizza although he works as their deliveryman instead of being in the kitchen.

TV STORY-Path of the Rhino

Despite joining the team, Dominic is initially rejected by the Jungle Fury Rangers because the Rangers don't think he is serious enough to become a Ranger, due to Dominic playing a friendly prank on the Rangers earlier. When he saves Fran using the refined techniques he developed in his travels however, he gains their trust.

TV STORY-Dash for the Dagger

During an intense battle between the Dai Shi Clan, the Overlords and the Jungle Fury Rangers, Dominic is able to steal back the Control Dagger and take control over the Rhino Steel Zord. With it, he is able to swiftly destroy a gigantic Carnisoar after he defeats the other Rangers.

TV STORY-Race to the Nexus

Following the defeat of Dai Shi, Dominic leaves Ocean Bluff, quitting his job at Jungle Karma Pizza to go travelling. Before he leaves though, he asks to Fran to go with him, and she agrees.

Dominic returns with his fellow Jungle Fury Rangers as part of the army of Legendary Rangers that help the Mega Rangers defeat the Armada once and for all, fighting in a huge battle against hundreds of X Borgs and dozens of Bruisers. Afterwards, the Rangers salute the Mega Rangers before teleporting away with Dominic returning to his normal life.

When events set into motion by Lord Drakkon cause the timeline to split into pocket universes, each anchored on a powerset, the Jungle Fury Rangers are split off into their own pocket universe.

As evidenced by the appearance of the Jungle Fury Rhino Sentries, Dominic falls to Drakkon's forces who strip him of his Rhino Morpher. After the Heart of the Master destroys reality, Dominic is erased from existence but is restored when the timelines are restored.

The Jungle Fury Rhino Ranger is a playable character in Power Rangers Legacy Wars. He is an Epic (Leader), Epic (Assist) character, and represents the Jungle Fury Rangers alongside Robert James.

Dominic is the classic laid-back genius; he has high martial arts potential but is also a slacker and scatterbrain who tends to never get anything right. 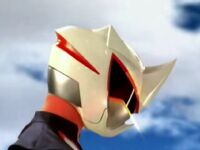 With the power of a rhino
Jungle Fury Rhino Ranger!

A female version of the Jungle Fury Rhino Ranger as seen in Super Megaforce.