The Gallant Appearance of the Five Samurai

"I'm over here. Maybe I should wake myself up by splitting that ridiculously large head of yours?"
―Dokoku Chimatsuri's first words upon unveiling himself on Rokumon Junk and abusing Shitari of the Bones.[src]

Dokoku Chimatsuri (血祭 ドウコク, Chimatsuri Dōkoku) is the leader of the Gedoshu, armed with the Shōryū Bakuzantō (昇竜抜山刀, Shōryū Bakuzantō Rising Dragon Mountain-Removing Sword), the Kōryū Gaiseitō (降竜蓋世刀, Kōryū Gaiseitō Descending Dragon World-Covering Sword), and the power to seal his fellow Gedoshu. His other powers include mutation, levitation, hypnotism of Nanashi, tentacle summoning, high speeds, , a power roar, a wind attack, energy blasts from hands, lightning attacks, and a powerful barrage of devastating purple fire blasts. He is easily angered and his comrades often suffer because of its intensity. The only things that can calm his volcanic temper are sake (rice wine) and whenever Dayu Usukawa plays her shamisen.

Unlike many Ayakashi, who were transformed humans who fell into their corrupted, monster-like state, Dokoku was born of the Sanzu River, who is the embodiment of pure anger and rage. However, events changed the day he started to hear a sorrowful shamisen, through a crack between the human world and the Sanzu River, making his anger abate and calming him down, quite possibly for the first time. The shamisen played through the crack for three years, before the player Usuyuki committed the act that made her fall into becoming Dayu and transforming her beloved Shinza into her shamisen. Dokoku met her as she arrived on the Sanzu River and chose to protect her from then on, seeing the importance of her shamisen as a means to prevent him from completely raging in both worlds.

TV STORY-Act 40: The Honorable Leader Heads to the Front Lines

Prior to the series' start, Dokoku made an attempt to conquer the human world, but was confronted by the 17th generation of Shinkengers. The Shinken Red of this generation confronted him and used a specific sealing character, which ripped his body apart at the consequence of the caster losing his life in the process.

TV STORY-Act 11: A Threefold Strife Over the next several years, Dokoku remained in the Sanzu River rebuilding his body, until he finally resurfaced at the same time the 18th generation started to fight a new Gedoshu invasion. Learning from his previous mistake, he begins his plan once again to use the tears of humans on the other side to flood the river, allowing for both the power and easy passage back into the human world, which he seeks to conquer.

Dokoku's philosophy is to merely let the plan go forth, to flood the Sanzu River for passage, instead of directly assaulting the human world. This differs from the philosophy from fellow Gedoshu, Juzo Fuwa, who believes that they must directly attack the human world, in order to conquer it. The difference in belief, with regard to conquering the world, has made Juzo more at odds with the Gedoshu leader, making him become a wild card to be able to handle evil plans his own way.

After an incident, where Dayu left his side, Dokoku's rage slowly became unbearable once again, made worse with Akumaro Sujigarano rising from the depths of the river, due to a summer-surge in Ayakashi power and starting to make his own moves in flooding the river. When finding out about Akumaro's own plan, which was, to use the pain of the transformed shamisen (which was damaged in a previous fight) for his own plans, Dokoku briefly entered the human world, even at the risk of rapidly losing water from his body which would lead to his own early demise. Once there, he annihilated the 18th Generation Shinkengers easily and took the shamisen from Akumaro, upon which he fixed it for Dayu, before returning to the underworld and being forced to dive back into the river to heal himself, due to the massive damage he took for being in the Human World, even for such a brief period of time.

His period of healing was rapidly shortened and ended, when Dayu finally sacrificed all connections to her former life and was killed by Shinken Pink, likewise destroying her shamisen and releasing Shinza's grief into the world. As Dokoku re-emerged in the human world, he embraced Dayu for what she had done, even if she no longer had the same feelings for him as she previously held. As a final act with her death, Dokoku absorbed her body into his own, healing all his damage from his previous Earth visit and giving him an added side-effect: an immunity to the "sealing kanji" utilized by the true Shiba Clan head, Kaoru. As the waters of the Sanzu River overflowed, likewise due to Dayu's sacrifice, he led his Gedoshu forces and his Junk Ship into the human world to conquer it.

As Dokoku invaded, he is met by the Shinkengers in battle. During their first assault, they utilize a new disk with the fire Mojikara of Kaoru utilized by Takeru; but while it damages him, he survives the assault and torments the Shinkengers into suffering further. During a regrouping and ultimately final assault, the Shinkengers force themselves into battle even with little Mojikara left; Dokoku has a harder time but appears to hold them off until he is finally hit by the Shiba Mojikara disk utilized by Shinken Blue, ending his first life.

In his second, final life, Dokoku easily held off Samurai Ha-oh with his thrusting energy attacks, until the Shinkengers decide to perform a final assault, where their Origami were thrown off bit by bit as they continued to move forward while gathering Mojikara. Left with only Shinken-Oh, the Shinkengers thrust their Mojikara-infused sword within Dokoku's midsection, finally ending his life once and for all. In his final words, he taunted the Shinkengers about the cracks between the human and underworld remaining open as the Sanzu River withdrew back to the underworld.

In Tensou Sentai Goseiger vs. Shinkenger: Epic on Ginmaku, he is thought to have somehow been revived to lead the Gedoushu again. But, it is revealed he is actually Brajira of the Messiah, under the guise of Buredoran of the Chimatsuri who lied to Shitari that he was Dokoku's heir so he can send the Sanzu River to poison Gosei World. He is killed by Ground Hyper Gosei Great before he could succeed. With the Gokaigers having killed Shitari, his legacy was finally at an end.

He is somehow revived to his first life as a commander of Dai-Zangyack. He and the other commanders teamed up with Dai-Shocker and fought the army of Super Sentai and Kamen Riders, including his enemies: the Shinkengers. He is briefly seen fighting GaoBlack in the background of the first aerial attack scene, DynaRed and DynaPink in the second scene, Kamen Rider Double and two of the Magirangers in the third, and the Dairangers in the background in the final scene.

and Super Sentai, giving them a hard time with Dokoku fighting against Kamen Rider Wizard

. The heroes of recent years were in a pinch until the arrival of a force of Sentai and Rider reinforcements led by Akarenger and Kamen Rider Ichigo

. He was seen fighting HurricaneRed and Kamen Rider X

TV STORY-Kamen Rider × Super Sentai × Space Sheriff: Super Hero Taisen Z a recreation of Dokoku was brought forth by Bangray among a collection of the most nefarious adversaries faced by the Super Sentai. Overwhelming Gokai Red and Zyuoh Eagle initially, Bangray's forces were matched when the Gokaigers and Zyuohgers joined their respective Red warriors. Engaging the remaining five Gokaigers alongside "Z Shin", "Dokoku" was worn down by a succession of two all-Red Gokai Changes, struck by Gokai Blue as Red Flash then VulEagle, Gokai Yellow as Shinken Red then GingaRed, Gokai Green as Red Racer then Gosei Red, Gokai Pink as MagiRed then GekiRed, and Gokai Silver as Bouken Red then TyrannoRanger, before being ultimately destroyed by the Final Wave.

He is sadistic, wicked, arrogant, oppressive, cruel, inhumane, unpleasant, and obstreperous. As an embodiment of rage, he is in a constant state of it, which can only be soothed by sake and the music played by Dayu on her shamisen. He is quick to aggravation and easily vexed, which makes him easy to manipulate and easy to make enemies. While not much on the intelligence department, he makes up for it in sheer hatred and rage. He isn't completely unreasonable however, as he once convinced an Ayakashi to eat humans raw, has been talked out of killing a minion a few times, and he showed forgiveness to Shitari for being coerced into helping Gozunagumo and to Dayu by fixing the same shamisen he damaged. 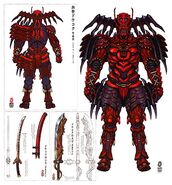