Anubian Chief Doggie Kruger (アヌビス星人ドギー・クルーガー, Anubisu-seijin Dogī Kurūgā) is DekaMaster (デカマスター, Deka Masutā) of the S.P.D. and Dekarangers. Nicknamed "Boss" (ボス, Bosu), he is the commander of the S.P.D. branch on Earth. During his more active days as a Dekaranger in his youth, he was quite feared to be faced in combat, due to his sword style being one of the strongest in the universe.

An alien from the Planet Anubis, he's a member of the Shep-Tribe and the much decorated commander of Earth's S.P.D. unit. He was a legend in his day as a Dekaranger, earning his other nickname, Hell's Guard Dog (地獄の番犬, Jigoku no Banken).

Doggie is a tough leader and being honorable, he will do anything to save the ones he cares about. He seems to have feelings for his assistant Cignian Swan Shiratori, panicking whenever he hears that Swan has an admirer. He also occasionally assists the Dekarangers as DekaMaster, wielding the powerful D-Sword Vega. His fighting style is the Galaxy Single Sword Style (銀河一刀流, Ginga Ittoryu), chosen by his Sensei to learn the style's secret technique, Vega Impulse. His number is 100.

Before becoming the commander of the S.P.D. branch on Earth, he was one of the regular customers of Dino House during his early days on Earth.

It was revealed in Dekaranger vs. Abaranger that Doggie suffers from a backbone problem which causes him to miss once every 2,000 attacks, which was cured by Yukito Sanjyou (AbareBlue). Incidentally, Doggie is friends with Ryunnosuke Sugishita, the owner of the DinoHouse restaurant and friend of the Abarangers, who in turn, was friends with Miyuki Ozu, the mother of the five Ozu siblings. After preventing Ginjifu Seijin Kazakku from attempting to resurrect Wicked Life God Dezumozorlya a second time, he assisted both teams as DekaMaster during the final battle.

When Doggie, Swan, and Miyuki met, they all quickly became close friends when Miyuki attempted to entrust the two with the Heaven's Flower. Doggie also fought Dark Magic Knight Wolzard for a short time, both proving to be evenly matched.

Kruger fought in the Legend War as a member of an "extra hero" squadron who assisted the Goseiger, Tsuyoshi Kaijou and Sokichi Banba reach the battleground where the final showdown occurred. Kruger sacrificed his DekaMaster powers along with the Extra Heroes and the rest of the Super Sentai at the orders of AkaRenger.

After Marika Reimon encountered Captain Marvelous and the Gokaigers, she contacted Doggie who intercepted and confronted Marvelous. When Marvelous kicked the Master License out of his hand, and Doggie drew out D-Sword Vega to engage him, Marvelous fought him off, even with handcuffs still on.

Before Kruger brought Captain Marvelous in, they accidentally stumbled into a Zangyack scheme overseen by the Alienizer Buramudo to launch Subterranean Missiles to destroy every city on Earth in two hours. When their presence was discovered, Kruger was wounded as he managed to get Captain Marvelous out of harm's way. Though Captain Marvelous offered to help him, Kruger refused to trust the pirate as he left him behind to stop the missile launch regardless of his injuries. Realizing how injured his captor was, Captain Marvelous saved the alien from the potential suicide mission and took him to safety. With Captain Marvelous's sense of honor against all odds winning his trust, Kruger uncuffed the pirate and handed him back his Mobilates. Marvelous united with his teammates and destroyed the missile launching device in time before reuniting with his crew. Together, they changed into the Dekarangers and defeated Buramudo.

When Buramudo was enlarged, GokaiOh was formed to stop him from manually launching the one of the Subterranean Missiles, taking out some of the Zangyack fleet in the process. Kruger told the Gokaigers they could now summon the Greater Power of the Dekarangers. Using the Dekaranger Keys, they summon the Pat Striker from within GokaiOh. They were soon able to finish off Buramudo after an intense gunfight. The next morning, the Gokaigers escorted a wounded Kruger when they were cornered by a police barricade. However, Officer Banban Akaza suddenly appears and notified the alleged acts of piracy by the Gokaigers were proven to be a hoax instigated by the Zangyack Empire. The pirates were free to go as he took Kruger, but with a warning not to abuse the powers of the Dekarangers.

He is briefly seen watching the events of the return of Black Cross Führer as the Gokaiger and Goseiger handle him.

After the final battle with the end of the Zangyack, Doggie Kruger joins with Signalman in saluting to the Gokaigers after they received their Ranger Keys from the pirates.

Doggie was gravely injured and hospitalized as part of a plot by S.P.D. Commissioner Kight Reidlich to frame him for accepting bribes from criminals in exchange for police information. Fortunately, Kight's plans were thwarted by the reunited Dekarangers, and both he and his underlings Assam Asimov and Mugi Grafton were defeated and Doggie's name cleared. Doggie and Swan also reunited and, by the end of the adventure, confessed their feelings for one another.

He returns along with Master Sha-Fu, Wise God Torin and Ticket as a cameo in the ending.

Contacted by Banban Akaza, Doggie was alerted to a wormhole from which several spacecraft had emerged and landed on Earth. Arriving at Neo DekaBase, Doggie met Shou Ronpo, Hammy and wolfman Garu, the latter of whom bore a peculiar resemblance to the Anubian which was noted by both parties. The strangers had been taken into custody by Sen and Umeko on suspicion of being Alienizers but were soon realized to be benevolent heroes who had arrived on their Earth by accident. Alerting them that the wormhole leading them home was closing, Kruger arranged for the Dekarangers to aid their Kyutama Gattai RyuTeiOh in DekaWing Robo to keep the wormhole open long enough to return them to their own space. Seeing the Kyurangers off, Doggie reminded Sen and Umeko to collect their visas to travel to the planet Waiha, where they were to be married.

Doggie Kruger joined the Super Sentai Strongest Battle as a member of Swordsman Team, where he partnered with ShinkenRed in the first round and won their match against Blue Dolphin and Yellow Turbo of Archer Team. Investigating the mysterious circumstances around the competition, he ran into Stinger and Captain Marvelous, both Sentai members he had encountered previously, and began to work with them. Ultimately, he lost the fourth round in a match against ToQ 5gou of Oddball Team. Before he disappeared, Kruger gave Kagura his DekaLicense and D-Wapper to help them in their investigation. 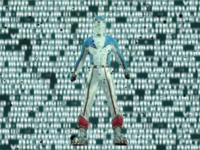 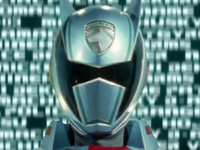 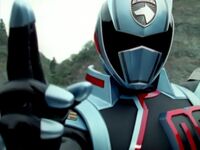 Doggie Kruger is portrayed by suit actor Hideaki Kusaka (日下 秀昭, Kusaka Hideaki), who is also his suit actor as DekaMaster, and voiced by Tetsu Inada (稲田 徹, Inada Tetsu), who had previously voiced Highness Duke Org Shuten from Hyakujuu Sentai Gaoranger. Kruger would become one of Inada's most recognizable Super Sentai roles, with the actor playing him throughout all his future appearances.

In Kyuranger, Doggie Kruger was portrayed by suit actor Yasuhiko Imai (今井 靖彦, Imai Yasuhiko), as Kusaka was already starring in the series as Shou Ronpo.

The DekaMaster Ranger Key (デカマスターレンジャーキー, Deka Masutā Renjā Kī) is Doggie Kruger's personal Ranger Key and what became of his powers after he along with the rest of the 34 Super Sentai sacrificed their powers to end the Great Legend War.

This key, along with the other nine extra hero keys and the fifteen sixth ranger keys, were initially acquired by Basco ta Jolokia and later used by the Gokaigers. Like all of his Ranger Keys, Basco used his trumpet, the Rapparatta, to turn the DekaMaster key into a puppet to do his bidding. Basco summoned DekaMaster, MagiMother, Wolzard Fire, along with the Black Knight in the Ginga Forest. They were all defeated, while the Black Knight key was taken by Gai, the other three were recovered by Sally. Basco later united his nine remaining Ranger Keys when he was confronted by Goro Hoshino (OhRed†). The Extra Heroes would then fight the Gokaigers again, who wished to take the Ohrangers' greater power rather than just be given it. DekaMaster and DekaSwan fought Captain Marvelous (Gokai Red), who fought as OhRed. The Extra Heroes were taken down by the Olé Bazooka. DekaMaster's key, along with the rest of the Extra Heroes, was claimed by the Gokaigers.

While in the possession of the Gokaigers, the DekaMaster Ranger Key was used by Joe Gibken (Gokai Blue) on two occasions.

After Zangyack were finally defeated, the Gokaigers gave the Ranger Keys back to their rightful owners. Doggie received his key back, allowing him to become DekaMaster once more.

Doggie Kruger/DekaMaster: to be added

Doggie appears as both an Anubian and as DekaMaster in the mobile game Super Sentai Battle Base.

DekaMaster appears with his team among all Sentai in the mobile game Super Sentai Legend Wars.