"I am...Earth's...first and last...Mecha-Human...I reached this generation's pinnacle of science, the ultimate scientist...I am the great Doctor Man!"
―Doctor Man's final words before his death.[src]

Doctor Man (ドクターマン, Dokutā Man) is the supreme ruler of Neo Empire Gear and an inventor who created all of its forces to conquer the Earth, ultimately facing Bioman in battle.

Doctor Man was originally a human named Dr. Hideo Kageyama (蔭山 秀夫, Kageyama Hideo), who was happy and successful living with his wife, Setsuko and newborn son Shuichi. Not too long after the birth of his son seventeen years prior, Hideo began to experiment on himself in a process meant to accelerate the development of intelligence. While ultimately becoming smarter than a computer, his physical body ultimately rapidly aged in the process.

To extend his life, Kageyama converted himself into a cyborg with a deep disgust for humanity, planning to conquer the world with his army of machines while initially hoping to remain alive long enough to find a worthy heir to his empire.

Assaulting the Earth from the hidden Antarctic base Neograd with his machines, his assaults ultimately reawakened BioRobo and the machine Peebo, who founded Bioman on Earth in order to prevent Doctor Man from creating a crisis that would destroy the planet in a similar way to their own home. Doctor Man's initial assaults were hard on the Sentai squad, leading to the death of one of their members and the relentless nature of their machine enemy. However he revealed his human nature when he revealed his "son" Prince to the world, proving both to Bioman and to Gear his human nature while showing the regret within Doctor Man that he would still have human feelings within himself. Even though Prince was revealed to be another of his Mecha Humans, the incident showed his weakness emotionally and made Doctor Man wish he could speed his own transformation into a perfect, emotionless machine.

When Shuichi Kageyama returns to his life in search of his own father, Doctor Man tries to approach him in hopes of making his actual son his heir to his empire by disguising himself as his former human self. While confused by his means initially, the protection of Bioman and the revelation of Hideo's origin by Shuichi's mother and his former wife, Setsuko to forced his son to turn against his father and find a way to deal with him. Upset by the loss of his real son, Doctor Man completes his transformation into an emotionless Mecha Human. He is soon attacked by the Big Three who felt betrayed by being led by a human who created them; but Doctor Man squelched the rebellion quickly, using a Mecha Human clone to confuse them and then recaptured them to remove all memories of their knowledge of his true identity.

Remaining vigilant in advancing technology to deal with consistent threats to Gear, Doctor Man always made upgrades and was on the lookout for new ways to conquer the planet or to defeat Bioman. Seeing the constant failure of his Mecha Gigan program, he ultimately upgrades them to the mecha-like Neo Mecha Gigan; while using the Miracle GX metal devised to not only upgrade himself but his Big Three and Beastnoids. Likewise with knowledge and interest prior in the potential of Anti-Bio Particles after using them in a scheme that killed one of the Bioman prior, he became interested with the arrival of Bio Hunter Silva in search of his ultimate Anti-Bio weapon, the mecha Balzion. While attempting to secure an alliance with Silva to find the machine, he wasn't afraid to manipulate and even use Silva for his own means in hopes of finding the machine for his own progress. But while keeping attention to his own technology, he likewise feared the technology of his rivals in trying to bring him down, such as the return of Shinichirou Gou, his former rival who had devised a Conscience Circuit that turned his own Mecha Humans against him under the alias of "Professor Shibata".

When Balzion is ultimately located, Doctor Man maneuvered his forces to retrieve the mecha by any means possible while dealing with all of the threats surrounding it. He begins sacrificing his Big Three generals in order to gain the mecha while capturing Silva to prevent the Anti-Bio warrior from using the machine; as well as capturing Professor Shibata to prevent his Conscience Circuit technology from being used against him again. While using his warriors to keep fighting Bioman in the machine, Doctor Man studies the Anti-Bio technology within it for his own usage. During Bioman's raid on Neograd, he ultimately loses Professor Shibata and Balzion, as well as the last of his Big Three warriors; but it was of no concern to the doctor due to completing his Anti-Bio research and using them to devise his two ultimate weapons: the mecha King Megas to crush Bioman, as well as the Anti-Bio Bomb to destroy the Earth in case his final battle with them failed.

However the one thing Doctor Man could not predict is his son Shuichi likewise reaching Neograd, using Silva's obsession with Balzion to sneak inside his fortress disguised as Prince. After the scientist returns to his fortress, weakened to the point of near-death with the defeat of King Megas while still planning to detonate his Anti-Bio Bomb, Shuichi makes one final plea towards his father, hoping that his former human self as Hideo Kageyama still existed within Doctor Man. Regardless of Shuichi's begging, Doctor Man continues on with pride until his final words that he is the world's greatest scientist and that he will continue to conquer the world to prove his genius. However after Doctor Man finally explodes, the Anti-Bio Bomb rises up from within the main Neograd control room, but Red1 is able to disable it by pushing a red button before it can go off. Whether or not Shuichi was able to reach Hideo in the end remained unsure, but the threat from Doctor Man had finally been neutralized once and for all.

Doctor Man appears in the clips from Choudenshi Bioman seen in the first episode of Kousoku Sentai Turboranger. 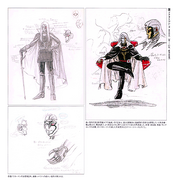