Powers From the Past

Dino Chargers, or simply Chargers, are small, battery-like devices utilized by the Dino Charge Rangers. They were developed by Kendall Morgan to harness the immense power of the Energems while mitigating the risk of carrying one in public.

Upon discovering that the Ankylo Zord had awakened, Keeper deduced that the Aqua Energem had already been found and bonded with someone who had yet to reveal himself. In the meantime, Shelby and Kendall learned how to approximate the Energem's power by combining traces of Ankylosaurus DNA with the energies funneled from the existing Dino Chargers. From this the Ankylo Charger was made, allowing the Rangers to command the Ankylo Zord without the person who bonded with its Energem (at least temporarily).

It is later revealed the Morph X is compatible with the Dino Chargers. This is due to its fuel source, the Energems, being linked to the Morphing Grid.

To activate one, a Ranger presses down on a button on the negative side of the Charger, building the charge.

The Dino Chargers can summon their respective Zords as well as access special abilities, weapons, and power-ups. When in combat, the Chargers are stored in the Dino Com, a belt buckle that serves as a utility storage unit and communicator.

When not in use, the Dino Chargers are replenished by the Energems in a special charging bay also developed by Kendall.

These chargers are the main chargers of the Dino Charge Rangers. Each Ranger has three aesthetically identical Dino Chargers stored in their Dino Com, with each giving access to their main transformation, Dino Steel mode, and their respective Zords.

When used in a Morpher, the following Dino Chargers provide the Power Rangers certain powers. Some are conventional, while some are rather unusual.

Dino Squash Charger - Makes anything and anyone hit by it flat like paper, able to fit through narrow spaces.

Dino Hypnotize Charger - Causes a victim to be hypnotized 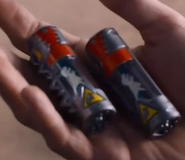 TV STORY-No Matter How You Slice It

Morph X Dino Charger - the Dino Charger from Grid Battleforce's Ranger Vault, charged by Morph X. It allows a Dino Charge Ranger to morph despite not having the Energem.

Chargers that can allow Rangers to access stronger forms.

As part of NYCC 2015, Bandai released an exclusive Dino Charge Mighty Morphin' Movie Charger set with each Dino Charger depicting four pictures. Each Charger featured the Ranger's Ranger form, a weapon specific to that Ranger, the Ranger's NinjaZord, and the MMPR Movie title.

These Chargers were released as part of Series 3 of Dino Charger Power Packs. Each Charger features the team's Red Ranger, their Sixth Ranger/Extra Hero, the teams' main Megazord, and their main title.