A Test of Trust

Though it is usually used by Trent, Tommy Oliver used it briefly by entering the Stegozord when Trent was busy fighting his clone.

The Dragozord is a white Tupuxuara Zord (a greater version of the Pterazord) piloted by Trent Fernandez. It can release powerful whirlwinds with his wings and combine with the Stegozord to form the Dino Stegazord's limbs (Dragozord's wings forms leg, legs forms arms). It is not to be confused with the similarly-named Dragonzord.

The Stegozord is a crimson auxiliary Zord patterned after a Stegosaurus. It can form a water-ski vehicle for the Thundersaurus Megazord, and a majority of the body for the Dino Stegazord. Although it was originally hatched and utilized by the Rangers, the White Ranger quickly used his powers to convince the zord to join him in battle.

The Stega Surfboard was a board form for the Stegozord used by Thundersaurus Megazord. The Megazord would stand on top of it and use it as a surfboard as a giant wave came. They would then move really fast next to their enemy continually attacking them. 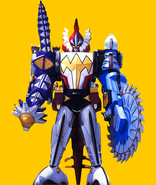 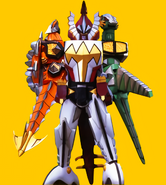 Valkasaurus Megazord cockpit
Add a photo to this gallery

Retrieved from "https://powerrangers.fandom.com/wiki/DinoStegazord?oldid=851460"
Community content is available under CC-BY-SA unless otherwise noted.