Dimensions in Danger is the tenth episode of Power Rangers Super Ninja Steel. Commemorating the 25th Anniversary of the Power Rangers franchise, it is a special team-up involving Power Rangers from previous generations assisting the Ninja Steel Rangers in defeating a new foe. It uses footage from Shuriken Sentai Ninninger The Movie: The Dinosaur Lord's Splendid Ninja Scroll!.

In a very special 25th Anniversary special, The Super Ninja Steel Rangers team up with Legendary Rangers in an epic battle to save the world.

Tommy Oliver, now a father who still lives at Reefside was just return from the dojo to pick up his son, J.J. at their home to school while phoning his wife to prepare a schedule for dinner. As Tommy was about to enter his house, he is captured by Lord Draven.

The Ninja Steel Rangers are playing pool at school when they receive a message from Mick saying they have some visitors. When the Rangers show up, the 3 strangers from the previous episode enter through their portal. They reveal themselves to be Wesley Collins/Red Time Force Ranger, Koda/Dino Charge Blue Ranger, and Gemma/RPM Silver Ranger. They explain that Draven has been capturing Rangers from other dimensions and ask the Ninja Steel rangers if they have seen anything suspicious. They say they haven't but they want to help. Wes explains that first, they need to find Tommy Oliver. They travel to Oliver's house, where they see Draven and some Basherbots carrying a large chest come through a portal. Robo-Tommy comes out of the house. Madame Odius also appears, reminding Draven about their deal. She then makes the three arrows inside Draven's chest powerful and explains that after firing the first Mega-Arrow, Draven must wait for the sky to turn red. She then goes back to the Warrior Dome. Draven, Robo-Oliver, and the Basherbots leave through the portal. Wes creates his own portal to the Antiverse where the other Rangers follow.

The scene changes to Draven's robot ranger factory, where it is seen that Draven has also captured Antonio Garcia/Gold Samurai Ranger, Katherine Hillard/Pink Turbo Ranger I, Rocky DeSantos/Mighty Morphin Red Ranger II, T.J. Johnson/Blue Space Ranger, Gia Morgan/Megaforce Yellow Ranger, and Trent Fernandez-Mercer/Dino Thunder White Ranger. Draven is using the Rangers to make robotic clones and is assembling an army to tear down the dimensions. Oliver, in his black dino thunder form, destroys one of the cloning machines. Draven's robotic factory is shut down, but he remains assured that his army is already big enough.

Meanwhile, the Ninja Steel Rangers and others try to sneak into Draven's factory, taking out all the Basherbots along the way. The real Tommy Oliver shows up to help them. He leads them into the factory, but Draven finds them. He fires one of his Mega-Arrows into the sky and a black crack forms on the barrier. The Rangers are forced to find another way inside; they find and free the captives. All manage to escape except for Oliver, who gets attacked by his robot imposter, who morphs into black dino thunder form. The real Oliver morphs into red Zeo form, and the two fight, with the real also morphing into white and green dino thunder forms. The robot gets defeated and the factory explodes into smithereens.

Brody and Sarah are searching for the exit when suddenly they find the chest containing two of Draven's Mega-Arrows. Sarah ties Brody onto the chest, with Preston controlling his Dragon Zord outside the factory. He flies Brody and the chest away along with the other Rangers making their escape, but Draven shoots them down. He fires his second Mega-Arrow into the sky as soon as it turned red. The Ninja Steel Rangers are confronted by Draven's robotic ranger army. They and the other rangers morph and defeat the robots.

Meanwhile, at the Warrior Dome, Badonna reveals that Draven's army was defeated, so Odius orders that Draven be Gigantified. As soon as Draven becomes gigantic, he fires his final Mega-Arrow at the sky. However, Tommy Oliver morphs into white and his Falcon Zord catches the Mega-Arrow. The other Rangers shoot Draven from the ground and the Falcon Zord plunges the final Mega-Arrow into Draven, destroying him. The crack in the barrier is fully repaired.

The Rangers all wish each other farewell before returning to their dimensions. 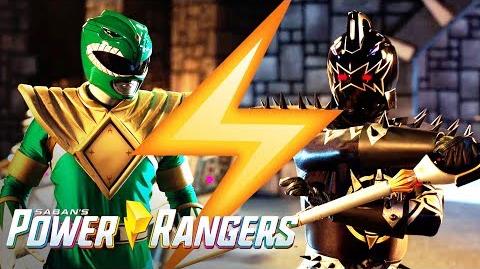