Retroactively, he is also referred to as the RPM Black Ranger or Black RPM Ranger, though these are in reference to the show, as opposed to proper labels.

He is a complete mystery, even to himself. He suffers from amnesia, and as a result, he doesn't know his real name. "Dillon" is a name he came up for himself after being pestered about his identification. It is known that Dillon has internal Venjix Hardware of at least Generation 7 caliber that boosts his physical capabilities to superhuman levels, though he doesn't know how it got there. It has been mentioned that he was part of a Venjix program that creates Venjix bot-human hybrids. He carries a key-operated, musical pocket watch that seems very sentimental to him. He is gruff, aloof and somewhat withdrawn—a bit of a loner amongst his peers. Despite all of this, he doesn't hesitate to help his teammates and has, specifically for Ziggy and Summer, verbally defended them.

At the beginning of the story, Dillon was found wandering in the wastelands trying to find his way to Corinth City, occasionally being ambushed by Grinders. While trying to figure out his location, he encounters Ziggy attempting to hijack his car. After a few minutes of negotiating, Dillion allowed Ziggy to direct him to Corinth City.

Through Dillon's skills and explosive devices, the two were able to make it past the Venjix barricade and into the city. However, Dillon was quickly discovered to have internal Venjix hardware, and they were both apprehended and taken to prison. Some of the inmates were about to attack Ziggy, but Dillon stepped in and saved his life in a rather impressive display of augmented strength and reflexes.

After saving Ziggy, the guards put Dillon in chains upon discovering what he was capable of. The Ranger Operators, after observing video footage of the prison fight and also needing to activate Series Black, made him an offer to join them. After initially scoffing at the idea, Dillon later agreed to become Ranger Operator Series Black if they accepted the condition that Ziggy also be released from prison. Despite this, however, he still had some issues with the duties given to him, and only ironed them out once he came to terms with what he would be protecting.

There are some notable similarities in personality between Dillon and Tenaya 7. Dillon has a rebellious side, often criticizing and talking sarcastically to Doctor K, similar to Tenaya's defiance of Venjix. He also has developed something of a rivalry with Scott, due to their very similarly stubborn and dominating personalities. The two are often seen trying to outdo one another, especially when it comes to their cars. Despite this, Dillon holds some level of respect towards Scott as a leader.

Dillon occasionally experiences cryptic dreams involving his origins—dreams in which the melody from his pocket watch and an unknown, blind girl seem to play a role. Thus far, the dreams have been too unclear for him to understand anything beyond what he sees, though, as time goes on, he seems to remember more which enables him to make more sense out of them. When an attack bot from a particular dream—-the Sat Bot (the one that took his memory)--shows up in Corinth, it mysteriously refers to him as Subject D-44. Being the only key to remembering who he is, Dillon does his best to not harm it despite the havoc it causes throughout the city. He eventually agrees to destroy it, deciding that, while he can't remember his past, he now has new memories with his teammates. During the fight, the bot activated a virus in Dillon's arm that will slowly spread through his inner mechanics, causing them to grow until they take him over completely. Doctor K says there is no cure. Venjix intends to use this virus to eventually bring Dillon under its control.

After undergoing hypnotherapy, he discovers memories of an area called Kenmore located in Omega City, evacuated after the first Venjix attack. The Rangers soon go out to the abandoned city to investigate. Unfortunately, it is soon discovered that this was implanted into his memory to lure the Rangers into a trap.

After finding a small key at an evacuated Venjix outpost and factory, Dillon discovers that by combining his key with the one he found, his watch will play a new melody. This melody is immediately recognized as the tune that Tenaya whistles before going into combat. Without telling the other Rangers where he is going, he speeds into the wasteland. While waiting for Tenaya, he plays the new melody from his pocketwatch. She enters the scene whistling along, and stating that it is the only song she knows. He then plays his song, and convincingly states that she is his sister. At first, Tenaya doesn't believe him, but after a fight, Tenaya realizes that she has begun to bleed. After running a biological scan, she confirms that she is Dillon's sister.

After Venjix is defeated for the last time, Dillon leaves Corinth with Tenaya and Summer to help rebuild the ravaged world.

"If they are there, my team will help them"
―Dillon and other RPM Rangers mentioned by Scott[src]

Dillon along with the other Ranger Operators and other Ranger teams are seen in Troy's premonition about the Legendary Battle.

After that the Mega Rangers meet Robo Knight, Dillon is seen in a flashback when Troy relates his visions about the Legendary Battle.

Emperor Mavro was defeated, but the remaining thousands of X Borgs still stand. Tommy gathered all the existing Power Rangers, Dillon returned with his fellow Ranger Operators as part of the army of Legendary Rangers led by Tommy that helped the Mega Rangers to defeat the Armada once and for all, fighting in a huge battle against hundreds of X Borgs and dozens of Bruisers. After the demise of the X-Borgs, Tommy shook hands with Troy and teleported off along with Dillon and the Legendary Rangers. He then returns to his home dimension in the RPM World.

During his research in the Ranger archives, Devon Daniels finds information of the Ranger Operators in another dimension and sees a picture of Dillon and his team with Doctor K.

When Dr. K remarked to Nate Silva ,how Venjix’s attack on Corinth was relentless, and despite the Rangers Operators incluiding Dillon trying their best to stop him.

When the Time Force Rangers are investigating a fracture in time and space that risks splitting the multiverse apart, Wesley Collins observes that the fracture is also threatening at least three other universes that are home to the Mighty Morphin Power Rangers, Dillon along with other Ranger Operators, and Dino Charge Rangers.

When events set into motion by Lord Drakkon caused the timeline to split into a pocket universe, each anchored on a powerset, the Ranger Operators were split off into their own pocket universe on Doctor K's birthday, he and the other Ranger Operators give a cake to Doctor K. However, they are screamed at by Doctor K due to her traumas that she had in her childhood, suddenly several Blue Samurai Sentries and Mastodon Sentries attack the dome city of Corinth, The Ranger Operators transform and fight against the Sentries, the Rangers manage to keep Lord Drakkon's forces at bay, until the Mastodon Sentries using their Black Dragon cannon,

In Corinth city, Dillon along with the other Ranger Operators and the military defend the frontier of Corinth city, fighting against more Ranger Sentries, Dillon attacks several Mastodon Sentries while he along with the other Rangers little by little are getting tired during the battle, until the Tyrannosaurus Dinozord drove by Jason and Lauren help them, causing a brief retreat of the Rangers Sentries.

Teleported to the Command Center

During another fight in Corinth against Lord Drakkon's Forces, Dillon and Ziggy fight against a Blue Samurai Sentries and Green Zeo Sentries. Dillon giving all his effort in battle but more of Drakkon's Sentries attack the Rangers, during the battle Dillon was using his Nitro Sword attacking a Green Zeo Sentry, Dillon and the other Rangers witnesses that how Drakkon stole the Morpher of Summer. Fortunately, reinforcements arrived to help the Rangers are other Ranger survivors rescued by Time Force Pink and Mighty Morphin Pink Ranger from other timelines, however he goes to the Command Center alongside the other Rangers and Doctor K.

After being teleported in the Command Center, Dillon is seen interacting with his fellow Ranger Operators Scott and Flynn.

Dillon along with the other Rangers have their Morphers upgraded by Doctor K. He prepared among the other Rangers to teleport on the moon of the World of the Coinless, Dillon is seen with Rocky DeSantos to prepare to fight against Psycho Blue and Mastodon Sentries.

Also is seen briefly in Tommy Oliver's vision when an alternate Kimberly aim a Green Chaos Crystal thrown at him.

Dillon's timeline was later restored by the Mighty Morphin Rangers after they defeated Drakkon.

In the timeline of the World of the Coinless, Lord Drakkon himself tortures the Mysterious Prisoner Ranger. Drakkon reveals to his prisoner some Ranger realities. The first reality is the Dino Charge World of the Dino Charge Rangers are seen fighting against Vivix. The second reality is the RPM World, where Dillon and the other Ranger Operators are seen fighting against Grinders.

Dillon along with the other Ranger Operators are among all the Ranger teams which appear in the Korean-developed mobile game Power Rangers Dash.

He is gruff, aloof and somewhat withdrawn—a bit of a loner amongst his peers. Despite this, he doesn't hesitate to help his teammates and has, specifically for Ziggy and Summer, verbally defended them.

It's been hinted that Dillon may have romantic feelings for Summer. While in the burning Venjix factory, the two almost share a kiss until water falls on them. They almost kiss again on another occasion, but are interrupted by Gem and Gemma. Dillon was also strongly against the idea of Summer getting married, even after Summer accepted the fact that she needed to get married to help her family. It was also stated in Gemma's diary that Summer is totally caring especially when it comes to Dillon.

Special Ability Aside from using the Ranger arsenal for battle, Ranger Operators can also generate their own personal ability without weaponry.

Episodes when he uses his invincibility shield: 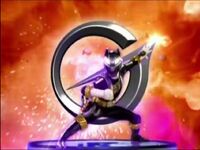 The Ranger Operator Series Black Ranger Key is Dillon's personal Ranger Key. This key along with the majority of the Core Ranger Keys are seen lining the Command Center's interior walls. This key is mainly used by Emma Goodall (Super Megaforce Pink) who uses it to fight as Ranger Black.

A female version of Ranger Black as seen in Super Megaforce.