Destruction God Gordom (破壊神ゴードム, Hakai-shin Gōdomu) was an unseen alien came from the outer space during the ancient times and worshipped by the Gordom Civilization.

40,000 years ago, Gordom arrived on Earth and ruled the sea. He was worshipped as a god by a civilian that would known by the name Gordom Civilization. Eventually he died sometime later and the remains preserved by the Gordom Civilization, his heart and brain, would come to be known as Gordom Precious by the modern day Super Sentai, Boukenger.

Despite his death, his heart and brain remains where the heart was used to empower the Giant God Gordom, the robotic form of the Gordom Shrine which modeled after said God. In the final battle against Arch Priest Gajah, Gordom Civilization's current leader, he absorbed Gordom's heart, transforming into Gajadom, a hybrid of the destruction god. While Gajadom still required Gordom's brain for the full transformation, his heart alone is enough to make him stronger than the aforementioned god. 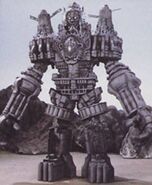 Gajadom
Add a photo to this gallery

Retrieved from "https://powerrangers.fandom.com/wiki/Destruction_God_Gordom?oldid=873419"
Community content is available under CC-BY-SA unless otherwise noted.