Dereputa of the Meteor (流星のデレプタ, Ryūsei no Dereputa, 1, 12, 16) is a Zutinmanian (ズティンマ星人, Zutinma Seijin) who is the combat commander of Warstar and one of Great King Mons Drake's top commanders, following a warrior's code. His signature attack is the Meteor Bullet (流星弾, Ryūseidan), using his bladed forearms to unlease an energy blast powerful enough to destroy the Heaven Tower with a single shot. He can shoot fireballs and rain them down in the sky like meteors, and shoot purple lightning from his scythes.

He was the one who destroyed Heaven's Tower when Warstar began its invasion on Earth. After doing so, he is immediately attacked by Gosei Red. After severely injuring his forearm in their initial confrontation, Dereputa becomes his nemesis for the rest of Warstar's attack. In his first encounter with all five Goseigers, he reveals Warstar and it's leader before leaving.

Later, he would use his own monster, Hidou, to distract Gosei Pink, Black, Yellow, and Blue while he himself fights Gosei Red. While he initially gained the upper hand the first time, he ends up being caught offguard by Gosei Red in their next fight. Dereputa retreats while Hidou fails and is destroyed by Landick Gosei Great.

When Mons Drake pushes his plans to use the Gravity Fall against Earth forward, Dereputa sets up the area for it and unleashes the dark matter in Mons Drake's body to perform. The Goseigers however, manage to stop the ceremony by sealing Mons Drakes powers while defeating Dereputa with the Gosei Dynamic. Though enlarged by the Bibi Bugs per his demands, He is seemingly destroyed by Hyper Gosei Great's Hyper Headder Strike. This would devastate Mons Drake and would push him off the deep end when his plans to have Buredoran avenge him and later have Targate replace him both fail. The resulting final plan afterwards would result in the end of Warstar.

However, Dereputa survived and discarded his breastplate with a scar on his chest from the attack before he came to the realization of acting on his own to prove his superiority. After Mons Drake's demise, Dereputa resurfaces to settle things with Gosei Red while attacking his teammates to lure him into battle and to ensure no interference. He and Gosei Red would soon duel one-on-one with the other Gosei Angels cheering Alata on. Despite a tough battle, Dereputa ends up being killed by Gosei Red striking him with his Skick Sword, marking the ultimate end of Warstar. Though defeated for good this time, Dereputa unknowingly plays a role in the release of the Yuumajuu, as the sealed Erurei Box is unearthed by a meteor shower that Dereputa created to draw Alata out. 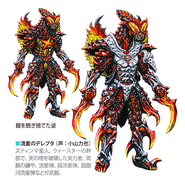 Dereputa of the Meteor Concept Art