A list of merchandise for the 4th Super Sentai series Denshi Sentai Denziman.[1]

Denzi Belt (デンジベルト, Denji Beruto) is a set of the Denzi Stick, holster, chest badge, and Denzi Red's belt buckle. The Denzi Stick can launch balls from both ends and the balls can be stored on the belt.

DX DenziTiger
Add a photo to this gallery

The first Chogokin figures to be produced with the body style that became the default. Each figure is designated as GB-16 and comes with a removable scarf, Denzi Stick, and a gun.

GB-15 Chogokin DaiDenzin: A transforming figure at a smaller scale than the DX version. It has a rocket punch gimmick and comes with the Denzi Sword and Denzi Ball. It was later released overseas as under Bandai America's "Godaikin" label.

Popy World Hero Series (ポピーワールドヒーローシリーズ, Popī Wārudo Hīrō Shirīzu) was a line of 10 centimeter tall plastic action figures. All five Denziman members were produced. No accessories were included other than a removable scarf. A storage case shaped like Denzi Red's head and shoulders was also released.

Popinica PB-96 DenziTiger (ポピニカ デンジタイガー, Popinika Denji Taigā): A small-scale toy of DenziTiger that comes with miniature DaiDenzin and Denzi Fighter figures. DenziTiger opens to reveal a launching bay and has solid molded tank treads that can be folded up. Two missile launchers are located on top and am extendable crane arm is located in the rear.

Released through 1992 and 1993, the Sentai Robo Collection (戦隊ロボコレクション, Sentai Robo Korekushon) was a line of 8.5 cm die-cast figures of the then-current and past Sentai robots. DaiDenzin was released in wave 2.

Bandai Capsule Chogokin is a gashapon line of miniature versions of Chogokin figures that were produced by Popy in the 1970's and 80's. DaiDenzin was included in the fifth wave released in 2003. It can be transformed into Denzi Fighter and includes the Denzi Sword and Denzi Ball.

CharaEgg Sentai Hero Series (キャラエッグ 戦隊ヒーローシリーズ, CharaEgg Sentai Hero Series) was a line of mini figures in blind boxes. This second and final set consisted of 17 different figures, including the Denziman team along with the Gaorangers and Jetman . A display box was also released and included figures of a Dustler, Grinam Soldier, and two Orgettes: one with standard colors and a red version. 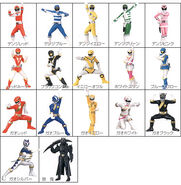 Retrieved from "https://powerrangers.fandom.com/wiki/Denziman_(Toyline)?oldid=878727"
Community content is available under CC-BY-SA unless otherwise noted.