Galaxy Mega (ギャラクシーメガ, Gyarakushī Mega) is the primary mecha of the Megarangers, formed from the combination of MegaShip and MegaShuttle with the command "Electromagnetic Fusion!" (電磁合体, Denji Gattai).

Galaxy Mega is armed with the Mega Sabre (メガサーベル, Mega Sāberu) which it uses to perform a wide variety of attacks, the Mega Shield (メガシールド, Mega Shīrudo) which not only deflects enemy attacks but enables it to safely enter Earth's atmosphere, and the Booster Rifle (ブースターライフル, Būsutā Raifuru), a gun created from the Shuttle Booster that can fire energy or freezing blasts.

It can also combine with Delta Mega to form the Super Galaxy Mega.

Despite showing great success early in the battles with Nezirejia, I.N.E.T. felt that the Megarangers recruited by Prof. Kubota didn't bring the robot to its full potential and had their tactics programer, Professor Toyokawa, create a program that would allow Galaxy Mega to fight without a human pilot. Following the incident with Shrimp Nezire, Toyokama realized that the unpredictability of Nezirejia's tactics would require unorthodox methods on their part as well and left the robot in the Megarangers' capable hands.Ep. 5: Decide! This Is an Underhanded Battle

Following the battle with Mad Guirail, Galaxy Mega was heavily damaged and took a back seat to the Megaranger's newest mecha, Mega Voyager, while it underwent repairs. It was later rendered inoperable near the finale by Burning Yugande. Despite attempts to get it moving, it remained immobile during the final battle and all that the I.N.E.T. team and Professor Kubota could do was observe the final battle between Mega Voyager and Grand Neziros inside the Galaxy Mega.

It was eventually fully repaired and utilized in Gingaman vs. Megaranger.

Galaxy Mega Cockpit
Add a photo to this gallery

MegaShip (メガシップ, Mega Shippu) is a space vessel that forms the bulk of Galaxy Mega's body, armed with the double barreled Mega Particle Cannon turrets on its dorsal hull. When not in battle, the MegaShip stays in continuous orbit above earth where it serves as the Megarangers' tactical operations base.

After the battle against Mad Guirail, the MegaShip was moved to the I.N.E.T. Moonbase where it was primarily docked there until needed. Prof. Eikichi Kubota and the other support staff maintain a constant presence on MegaShip, even when engaging giant opponents.

When forming Galaxy Mega, the sides and nose form Galaxy Mega's legs, the undercarriage forms the arms, and the underbelly detaches to form the shield.

During the combination into Galaxy Mega, the MegaShuttle forms the head and thruster backpack, while the Shuttle Booster (シャトルブースター, Shatoru Būsutā) that takes MegaShuttle into space forms the Booster Rifle (with the fuel tank holding the handle and muzzle). The orbiter docks in the nose of the MegaShip while the Shuttle Booster can be docked to its underside. On the toy, the Shuttle Booster can be separated into three pieces with the boosters attaching to the sides as a pair of missiles and the fuel tank becoming a dorsal mounted cannon. This function however was never used in the actual show. 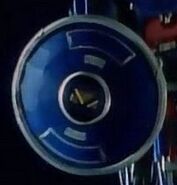 Booster Rifle
Add a photo to this gallery

Galaxy Mega, as one of the past Sentai Giant Robos, imbued Hyakujuu Gattai GaoKing with its power to defeat the giant Lost Highness Rakushaasa. Hyakujuu Sentai Gaoranger vs. Super Sentai

Galaxy Mega: to be added

Galaxy Mega appears in the Denji Sentai Megaranger video game in an area of gameplay which involves clicking on the screen at the right moment so Galaxy Mega can attack the monster before it gets hurt.

Retrieved from "https://powerrangers.fandom.com/wiki/Denji_Gattai_Galaxy_Mega?oldid=923846"
Community content is available under CC-BY-SA unless otherwise noted.