Demonite was a knight-themed demon and one of Diabolico's most powerful monsters, alongside Thunderon and Falkar. He was the leader of the trio. Demonite serves as one of the main antagonists of the episodes "Ryan's Destiny" and "Curse of the Cobra" and as part of Troika, he serves as the secondary antagonist of the episode "The Cobra Strikes".

As a last resort to defeat the Power Rangers, Diabolico summoned the three last monsters up his sleeve, known as the Troika Monsters. A team composed of Demonite, Thunderon, and Falkar, Demonite was best suitable as leader of the group. Their first scheme was to use explosive, harmless looking feathers to lure the children of Mariner Bay into finding and playing with them. Upon reaching the hill, the three monsters created unique explosive feathers and unleashed them over the city. Eventually their presence became known and they were greeted by the arrival of Lightspeed Rangers. For Demonite's first encounter, he battled Joel and easily defeated the Green Ranger with his strength and speed. After overhelming the heroes, villains revealed that their feathers are explosive feathers that would detonate in the dark areas and that every feather would destroy the city in the sunset. Then Rangers continued the fight, but still were no match for Diabolico's most powerful minions. As the sunset neared, the rangers attempted to fall back and villains perused. Rangers tried to use the Rescue Bird, but monsters redirected the fire at rangers, heavily injuring them. Soon the sunset was near and rangers were surrounded by explosive featers, too wounded to escape, leaving villains enjoy their fate. When sunset rose up, the feathers exploded one by one, and rangers weren't able to escape their blast, until the entire area of feathers exploded, sending the heroes crusing through the wall of the warehouse. The rangers weren't able to fight anymore, leaving them at the mercy of demons, until Ryan arrived to help the rangers. Although Demonite fought Ryan, he and his comrades were defeated and retreted, but they promised to return. Ryan's Destiny

After the trio's initial defeat, Demonite reported back to Diabolico, who gave him a card with a mirror-like appearance. Then they returned to the city and again fought the Rangers. He utilized this card, which created a clone of himself. This clone was connected to its host and went After Ryan While the Core five went after the original one, Falkar and Thunderon. Carter held the monster at gun point with his V-lancer in blaster mode and the uni-laser. Carter almost blew the both of them up, but then he lowered his weapons and decided to help Ryan. With Carter off-guard, the original Demonite prepared to attack him, but Carter turned around at the last second and blasted him destroying him, with the clone blowing up as well. Demonite was made into a larger advanced form by Diabolico, like several other monsters. However, Demonite was defeated once again by both the Lightspeed Megazord and the SuperTrain Megazord. Curse of the Cobra

Falkar and Thunderon, his comrades, were much later defeated in battle as well, and converted into crystals, which Diabolico utilized to create the ultimate monster: Troika. In Mariner Bay, Diabolico briefly encountered the rangers. Then he activated the crystals and combined the essence of Demonite, Thunderon and Falkar into the new super monster Troika. With all powers of three demons at his disposal, Troika effortlessly defeated the heroes, even deflecting the Spectra Blast, forcing them to retreat. Then Troika attacked the centre of Mariner Bay to draw the rangers out. Rangers arrived and again battled Troika, but were unable to defeat him. Without other options, rangers activated their last weapons the Battle Booster. With aid of Battle Booster, rangers were able to increase their strength and force Troika back and then defeat him with Battle Booster Beam Attack, putting the end to Diabolico's monster. The Cobra Strikes

Demonite is a ruthless and headstrong monster and will do anything in his power to destroy the Power Rangers, though despite this, he is shown to be loyal to his master Diabolico, as well as his comrades Falkar and Thunderon. He is also was shown to be good friends with Thunderon and Falkar. 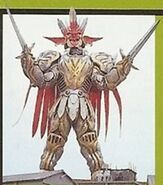 Giant Demonite
Add a photo to this gallery

Retrieved from "https://powerrangers.fandom.com/wiki/Demonite?oldid=849273"
Community content is available under CC-BY-SA unless otherwise noted.