"Never put too many fish into one bowl...!"
―Final words before Death[src]

At a park, he used his Popoinopoi to capture humans and put them in his fishbowl including Umika. After that he battled Patren2gou, before he had taunted Patren2gou of the people that Demeran captured. Once that was done, he made his escape.

He was looking for more people for him to capture at the docks, but turns out the only people are here are the Patrangers. So he battled the Patrangers and during the fight he'd manage to trap one in a fish bowl, but unknowning to him, Sakuya freed everyone from within the bowl and with help from Noel they manage to break the fishbowl freeing everyone that are trapped inside. After that Demeran then battle the Lupinrangers and during the fight Lupin Red gained access to Demeran's safe (which his password is 7-0-8) and got a La pluie violette (which translate as "Purple Rain") Water Gun after that he was taken out by the Lupinrangers. 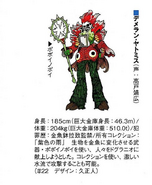