"Ummm........Tanbara-san, can I have a moment? (....) The ring is mine! All that's left is to set it in this. The super energy will belong to the Jaryuu tribe!"
―Wicked Dragon Dembey's first words[src]

Dembey was created to infiltrate MOE-TV to obtain the Ring of Prosperity by posing as the station's mascot "Dembey", when Sakura foils its plans, reveals his true, violent identity and along with some Jaryuus, enlarges itself and attacks with his fire breath and sword but was killed by Voyager DaiBouken's Riding Adventure Drive. The way to difference him from the real Dembey is that the evil one isn't wearing shoes. 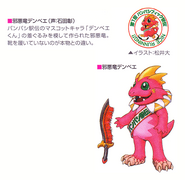