Delta Runner 1, alternately known as the Red Delta Runner is a 6-wheeled police car piloted by Jack Landors. Delta Runner 1 is extremely fast and maneuverable and has arms that stretch out to help form the Megazord. Its main attack is Transformation Delta where pieces from Delta Runners 3 and 4 become a sword attached to the left side that can theoretically destroy a giant monster or robot. It forms the main central body of the Delta Squad and Deltamax Megazords. 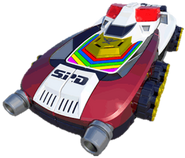 With Noah Carver's access to the Legendary Ranger Database and his team's mastery of the S.P.D. Rangers' powers the Super Mega Rangers gain access to the Delta Runner Zord as part of the S.P.D. power set. This version of Delta Runner 1 sports an upgraded appearance from its original form such as the Super Megaforce logo on its hood, headlights that double as laser cannons and gatling guns in the tires that allow it to perform the Delta Squad Fire, a 360-degree shooting attack. In addition to attacking independently, the Delta Runner Zord can combine with the Legendary Megazord to form the Legendary S.P.D. Megazord, becoming the Megazord's chest piece and dual guns that also serve as body-mounted weaponry.