Delphine is the White Aquitar Ranger, and the leader of the Alien Rangers. She is an Aquitian that requires waters of Aquitar in order to live.

She is also referred to as White Alien Ranger by people of Earth, as well as Mighty Morphin Alien White Ranger a variation on her alternate in-show label, though it is more in reference to the show itself than a proper label.

At some point in her life, Delphine, along with the other Aquitian Rangers were given their Power Coins and Battle Borgs by Ninjor, the guardian of the Temple of Power.

Delphine and her fellow Rangers were summoned to Earth by Zordon after the Earth Rangers were rendered powerless and transformed into children by Master Vile, acting as Earth's replacement Ranger team until the original Rangers could reset time to normal and retrieve the Zeo Crystal to act as a new source of power.

She was the leader of the team also (the first female to be a Power Rangers team leader), though, as Red Ranger, Aurico takes point in some battles. Delphine pilots the White Battle Borg and the White Shogunzord, Delphine also has more endurance and can survive for long outside of water than her team. Water is the essential element for the survival and regeneration of the Alien Rangers.

Delphine and the rest of the Aquitar Rangers departed the planet again shortly before the destruction of the Command Center.

When Billy started suffering from accelerated aging because of the regenerator he used to restore his proper age had a side effect, Delphine and Cestro of the Aquitar Power Rangers arrived to help. The Alien Rangers attempted to restore Billy using a Regenerator of their own design, but the device backfires and takes out the teleportation unit. Though Delphine and Cestro repair the device, they needed very fresh water for it to work as the backfire has contaminated the water they brought with them. Rocky suggests going to Angel Grove Falls, and Billy recommends that they take the Zeo Jet Cycles.

When the Zeo Rangers return to the Power Chamber after a short fight, Delphine reports that there may be a way to save Billy. She tells them of the Eternal Falls, a mystical source of water which keeps her people young and healthy, but Cestro warns that its effects on humans are unknown. Billy is willing to take the risk and has asked that a friend of his from Aquitar, Cestria, bring him some of its water. Delphine also reports an observation she made about Impursonator, which Kat later uses to come up with a plan.

As Cog Changer and an army of Cogs converge on Angel Grove Colosseum, along with Impursonator. The entire team of Aquitar Power Rangers join the Zeo Rangers, sparking an enormous battle royale between Rangers and monsters. As the Cogs are dispatched, Klank and Orbus arrive to enlarge Cog Changer, while Rita and Zedd cross their staffs to make Impursonator grow. The Zeo Rangers bring in the Super Zeo Zords to deal with the giants while Jason and the Alien Rangers finish off the remaining Cogs.

During the invasion of the universe by Dark Specter's United Alliance of Evil, Delphine and the other Aquitian Rangers battled Divatox's army on Gratha, where they were defeated. They were later saved by Zordon's Energy Wave.

Delphine and the other Aquitian Rangers returned as part of the army of Legendary Rangers that helped the Mega Rangers defeat the Armada once and for all, fighting in a huge battle against hundreds of X Borgs and dozens of Bruisers. She then returns to Aquitar.

When events set into motion by Lord Drakkon caused the timeline to split into a pocket universe, each anchored on a powerset, the Alien Rangers were split off into their own pocket universe. White Aquitar Ranger eventually received Zordon's call through the Morphin Grid and was among numerous Rangers who rallied to his pocket dimension led by the Quantum Ranger for the last stand against Lord Drakkon, reunited in the Command Center.

The Alien Rangers like the others team Rangers teleport to the Moon of the World of the Coinless, facing some new types of Ranger Sentinels.

Delphine's timeline was later restored by the Mighty Morphin Rangers after they defeated Drakkon. 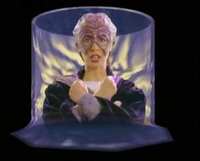 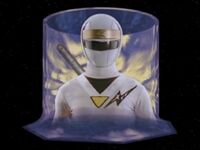