Deinbaruto of the Morning Star

Deinbaruto of the Morning Star

Assuring Rasil that he and the other Gosei Angels will stop it, Alata is joined his allies before they all ambushed by revived phantoms of Warstar aliens who subject them through a series of illusions before Gosei knight arrives and defeats the phantoms. 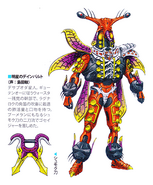