Dayu Usukawa (薄皮 太夫, Usukawa Dayū, lit. "Thin-skinned Courtesan") is the right hand of Dokoku Chimatsuri and the only one he is kind to, provided she knows her place as his obedient and unquestioning servant. Her character is the basis for the Futakuchi-onna of Japanese myth.

In life, she was Usuyuki (薄雪, Usuyuki lit. Light Snowfall), a woman who obsessed over Shinza, a man who never loved her. However, when scorned that he loved another woman instead of her, Usuyuki incinerated him and those at an engagement party in a suicidal crime of passion. But once witnessing that Shinza would still love another, Usuyuki's emotions corrupted her soul and turned her into Dayu, bonding Shinza's soul into a shamisen that she carries with her, creating eerie and unsettling songs that become a means to soothe Dokoku's rage. However, she has trouble getting along with the Ayakashi because of her life as a human, which she makes attempts to reclaim.

One failed attempt results with her being saved by Juzo, developing feelings for the Gedou as she begins to defy Dokoku's orders as well. Though she claimed her feelings for Shinza had long died, after becoming a rogue, Dayu refuses to give him up as it would end her existence and she doesn't want Shinza's soul to be reunited with his love. Dokoku angry that she did not kill Juzo as he ordered her to, he burned her shamisen, making Shinza moan. She then aided Akumaro in several of his schemes when he promised to repair her shamisen, but turned against him when she found out he had no intention of keeping his word and only wanted to use the pent up misery of Shinza for his plan. After failing to reclaim her shamisen and getting soundly beaten by Akumaro, she is saved by Dokoku, who drove Akumaro off then repaired the shamisen with part of his own body. She told Juzo her feelings for Shinza had disappeared but Juzo did not believe this to be true. Soon after Akumaro's demise, Dayu returns to the Rokumon Junk to assist in Dokoku's reawakening.

Dayu deliberately baits Shinken Pink into destroying her shamisen, mortally wounding her in the process, while reviving Dokoku with all of Shinza's pent-up suffering. She later uses the last of her power to restore Dokoku's body, making him immune to the sealing character. With only her kimono remaining, which Dokoku later throws into the Sanzu River.

and Super Sentai, giving them a hard time with Dayu attacking Gokai Red and Gokai Pink. The heroes of recent years were in a pinch until the arrival of a force of Sentai and Rider reinforcements led by Akarenger and Kamen Rider Ichigo

with Dayu seen fighting against Gokai Yellow and Bouken Yellow. The combined forces of superheroes were able to turn the tide against the Madou army. They lined up and used their various finisher attacks to destroy the revived monsters.

In battle, Dayu uses a shortsword hidden in her shamisen, with the headstock acting as the hilt. It can be used to charge at her opponents in blinding speed and charge up an energy attack. After her instrument was damaged, Akumaro gave her the Sange Hankontō (散華斑痕刀?, Glorious Death Spotted-Scars Sword) dagger to use while he took the shamisen. She can use the 'mouths' on her body to shoot energy beams, slime, and white steam. 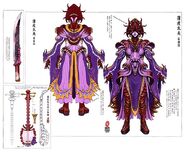