Dax Lo is one of the main protagonists of Power Rangers Operation Overdrive. He is a stuntman and aspiring actor who becomes the Blue Overdrive Ranger, the Blue Ranger of the Overdrive Rangers. He is once a "boyfriend" of Miratrix.

Dax was chosen by Andrew Hartford for his ability to fulfill incredible tricks, lack of height fear, depth, knowledge of dangerous places and skills of martial arts.

TV STORY-Kick into Overdrive An absolutely highly skilled film stuntman, Dax was unappreciated and ignored in his job; he tends to babble about his previous roles and compare events to films. He adores the jokes but does not like being left without credit for his work, and his dream prior to becoming a Ranger was getting a lead role he would be remembered for. He is the most enthusiastic of the Overdrive team, enjoying getting to be a real superhero. He used to have a girlfriend named Mira from which he saved her from one of her henchmen, before she was revealed to be the powerful, evil Miratrix. He still believes she harbors feelings for him.

TV STORY-Heart of Blue Dax has also shown that he understands his duties of protecting the world, but this hasn't lessened his dream of attaining a true acting career. Dax is the first to use the Transtek Armored vehicle, which he used against Miratrix, Kamdor and Moltor and their monsters.

At the end of the series, Dax declared that he had had enough of stunt acting, and had expressed a desire to direct instead.

His genetic power is super agility (allowing him to jump great heights and at high speeds), his primary weapon is the Drive Vortex, and he commands the Gyro and Cement Driver Zords.

Dax and the other Overdrive Rangers returned as part of the army of Legendary Rangers that helped the Mega Rangers defeat the Armada once and for all, fighting in a huge battle against hundreds of X Borgs and dozens of Bruisers.

When events set into motion by Lord Drakkon caused the timeline to split into pocket universe, each anchored on a powerset, Dax is the only survivor the Overdrive Rangers were split off into their own pocket universe. Blue Overdrive Ranger eventually received Zordon's call through the Morphin Grid and was among numerous Rangers who rallied to his pocket dimension led by the Quantum Ranger for the last stand against Lord Drakkon, reunited in the Command Center.

Dax along with the other Overdrive Rangers as well among all the Ranger teams which appear in the Korean-developed mobile game Power Rangers Dash.

Dax is a show off at best. He has a rather annoying tendency to treat every battle and meeting as a stage performance, exaggerating his actions and facial expressions and acting often goofy and obstreperous amongst his friends and teammates. Despite this, he can be serious in battle, and can treat his enemies with the respect they deserve. He is loyal to his friends, and cares about them, standing by their side through thick and thin, and always willing to risk himself to help them. 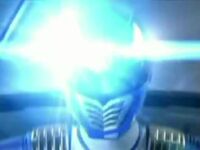 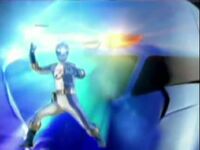