Epic 4: Echo, Song of the Angels

Datas (データス, Dētasu) is a friendly robot that is sent by Master Head to Earth prior to Heaven's Tower being destroyed by Dereputa as both an emergency system and means for communication between the Gosei World and Earth. While usually sleeping, Datas can pinpoint the likely location of Warstar, Yumajuu, and Matrintis activity. His form is based on a Dice-O arcade machine. It was stated that the reason he did not make an appearance in Gokaiger Goseiger Super Sentai 199 Hero Great Battle was because he was destroyed in the Legendary War.

Datas, like his American counterpart Tensou, is very childlike, naive and innocent but very easy to brainwash (as in one episode he turns against the Goseigers and fights them). He is also very confident and determined when it's time to battle monsters.

Datas: to be added 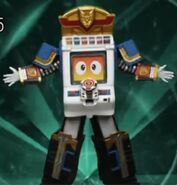 Retrieved from "https://powerrangers.fandom.com/wiki/Datas?oldid=942748"
Community content is available under CC-BY-SA unless otherwise noted.