"I've got you to thank for that! That's why I want it to be *you* that takes me back in. Please... do it."
―Dash's final words before getting capture[src]

"Oh no, the DNA Patch!"
―Dash after Nadira hits his DNA Patch and enlarges himself.[src]

Dash is the race car driver themed mutant, who is an old rival of Lucas Kendall. He is the secondary antagonist later anti-hero of the episode "The Last Race" .

Dash, like all other mutants, was created by a chemical accident. He had two forms, a mutant form and human form. This mutant was one of the best race car drivers. He was a rival of Lucas and wanted to defeat him. Lucas sympathized with Dash and even respected him as a friend. Dash said that he and Lucas had six races; Dash won three and Lucas won three. But in the tiebreaker, Lucas lost, only because he nearly killed children in the race. Later, Dash, while racing recklessly, caused a terrible accident and was frozen. In the twenty-second episode, Ransik released Dash and Nadira wanted him as her driver, because of his ability. When Dash met the Rangers, he greeted a morphed Lucas, who wanted him to quit working for Nadira. But Dash challenged Lucas for a tiebreaker race. Lucas stopped the race, because Dash nearly killed children on the road. Dash realized the harm caused by his obsession with winning, declared Lucas the winner and quit as Nadira's driver. But she gave Dash a mind control armor. Under the armor's control, he fought the rangers, but was eventually defeated. He removed his chain of DNA and enlarged himself. In the giant battle, Lucas finally freed Dash, destroying the armor with Time Force Saber. Dash asked Lucas to freeze him, because he is sorry for his actions. Sadly, Lucas froze him with Time Strike. He promised his former rival, now friend, to free him in the future. Flashforward shows that Dash is free once more and a racecar winner again. So it is possibly he made peace with Lucas and turned to the side of good. The Last Race

Dash is very charismatic, prideful, confident and intelligent individual. He is much more different than other mutants. Unlike other mutants, who interests only in power. Dash has codex of honor. He interest only in races and respect his opponents. The reason, why he turned to the bad side is arrogance. Dash isn't mad or evil. He has logic and has good qualities. He is presented in the series more as anti-hero, than a villain. Because of morally, he eventually found peace with Lucas and rangers and turned good. 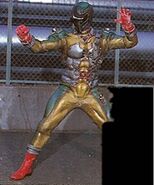 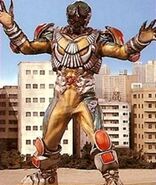 An alien with the head of Dash as seen in "Shadow" Pt. 2.
Add a photo to this gallery

Retrieved from "https://powerrangers.fandom.com/wiki/Dash?oldid=943574"
Community content is available under CC-BY-SA unless otherwise noted.