The Dark Beasts (闇獣, Yamijū) are a race of giant monsters that are used by the Dark Empire Yodonheim. Before being sent to Earth, the are equipped with a giant Jamen (邪面 Evil Mask) by Mask of Darkness Carantula, turning them into Jamen Beasts. 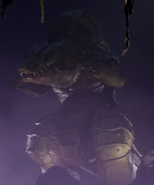 Basra
Add a photo to this gallery

Retrieved from "https://powerrangers.fandom.com/wiki/Dark_Beasts?oldid=972066"
Community content is available under CC-BY-SA unless otherwise noted.