Daradara (ダラダラ, Daradara, 42-44): A Yokai that the Daimaou cloned from his being, as a birthday present to himself.

He siphoned Ninjaman's power to achieve a ninja-style form. This became a problem when every attack inflicted on Daradara causes the pain from the attack to be transferred to Ninjaman himself.

TV STORY-Ep. 42: The Plundered Ninja Power Events become much worse when Daradara uses the same ability on the Kakurangers, except NinjaRed.

TV STORY-Ep. 43: The Last Day of the Sanshinshou However, Daradara had a glaring weakness: he only feels pain when his "father" is in pain himself. Learning this, NinjaRed manages to wound Daimaou (transferring the pain to Daradara) long enough to cancel out the siphoning process. Rendered back to his original and powerless state, Daradara was easily killed by Muteki Shogun & Samuraiman. A weakened Daimaou soon retreated afterwards. As he is a clone of Daimaou, he is not based on any actual Youkai of legend.

Though unseen, Daradara's spirit presumably emerged within the Seal Door along with all the other defeated Yokai, after their master Daimaou was finally contained there by the Kakurangers. Reeling that they were now powerless in captivity, the Yokai all vowed that they would one day be reborn and regain their power, cursing humanity.

Daradara, being an offshoot of Daimaou himself, does not appear to possess any independent personality of himself. Instead, he acts more like an extension to Daimaou, even imitating his exact movements.

Daradara can equip himself with siphoning gloves to drain power from Ninjaman and the Kakurangers.

Daradara can also transform into a slime-like state to move around quicker, as well as attach himself to opponents more quickly, before draining their powers. 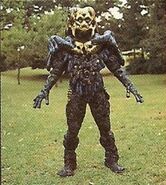 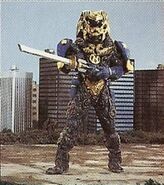 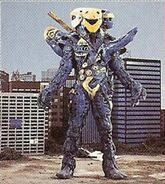 Retrieved from "https://powerrangers.fandom.com/wiki/Daradara?oldid=945777"
Community content is available under CC-BY-SA unless otherwise noted.