Damon Henderson is Galaxy Green of the Galaxy Rangers.

He is also referred to as Green Galaxy Ranger or Lost Galaxy Green Ranger - variations on his in-show label, though the latter is more in reference to the show than a proper label.

Damon was a senior mechanic on the Astro Megaship before Kai Chen took the ship to Mirinoi to save Mike Corbett and the future Galaxy Rangers (Kendrix, Leo and Maya).

Damon's wisecracking and playful nature can be deceiving. Although he is always ready with a quick comeback or witty remark, he takes his job as the Green Ranger very seriously. A top-notch mechanic, Damon's knowledge of the Astro Megaship is an invaluable asset to the team. His training as an amateur boxer gives him an extra edge when fighting the forces of evil.

In Turn Up the Volume, Damon competes with a rival named Baxter for the position of Chief Mechanic of Terra Venture. Baxter wins by stealing Damon's designs for an Ultrasonic Transmitter to defeat Decibat, but the designs aren't complete and the machine fails when Baxter attempts to use it on the monster. Damon covers for Baxter and helps him fix the machine to defeat Decibat. Afterwards, Baxter apologizes and gives Damon the job but he changes his mind when he learns he has to do paperwork and wear a suit. Instead, Damon allows Baxter to have the job so he can focus on fixing things.

In Lightspeed Rescue, after Trakeena survived her final battle with the Galaxy Rangers in Journey's End, Damon joined his teammates and helped the Lightspeed Rangers defeat her once and for all. He fought alongside Joel Rawlings, his Green Ranger successor and the Green Lightspeed Ranger. He returns to Mirinoi.

Damon was helping the residents of Harwood County before reuniting with his fellow Galaxy Rangers to fight the Armada. He was one of the Rangers who saluted the Mega Rangers. He once again returns to Mirinoi.

He was shown along with the other Galaxy Rangers when the villains were looking for a past villain to revive with the Reanimizer, and came across Psycho Red. 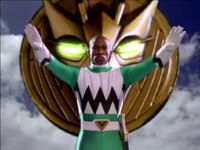