A list of merchandise for the 17th Super Sentai series Gosei Sentai Dairanger.[1]

Gosei Sentai Dairanger Aura Changer & Kiba Changer ~Super Sentai Artisan~ (五星戦隊ダイレンジャー オーラチェンジャー＆キバチェンジャー 戦隊職人 〜SUPER SENTAI ARTISAN〜, Gosei Sentai Dairenjā Ōra Chenjā & Kiba Chenjā Sentai Shokunin): A set of both of the Dairanger changers that was released by Premium Bandai as part of the Super Sentai Artisan line in 2016. Compared to the original 1993 release, they feature upgrades such as die-cast parts and newly recorded sound effects and voice clips. The Aura Changer has voice clips from Ryo, Daigo, Shouji, Kazu, and Rin while the Kiba Changer has clips from Byakkoshinken. The Aura Changer has two versions of the rollcall with different background music, a sequence of special attacks being called out, and a version of the rollcall music without voices. The Kiba Changer plays Kiba Ranger's rollcall and special attack. 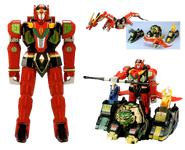 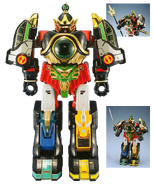 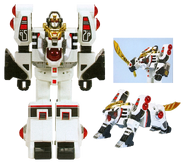 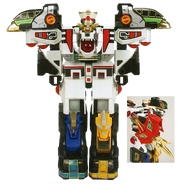 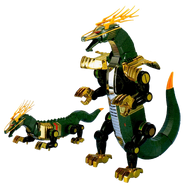 Daijinryu
Add a photo to this gallery

In 2018, Premium Bandai released updated DX versions of Dairen'oh and Won Tiger as part of the Super Sentai Artisan line. They are approximately the same size as the original 1993 versions, however they have updated molds with added articulation and use paint applications where the original version used stickers. The box art is reminiscent of the original DX versions with some subtle differences: the Super Sentai Artisan logo, new product photos, the lack of furigana, and a more blue tone to the gray background on the Dairen'oh packaging.

The original molds and design documents for DX Dairen'oh weren't available, so the mold was completely remade.[6] Most noticeably, the hands are shaped differently and the sword sheath's curve is reversed in order to be screen accurate. Two sets of mini Dairanger figures are included; one set is based on the original release and the other features new molds with more realistic proportions and dynamic poses. Both the Dairenken and Dairen'oh's mask came in two versions; standard versions with a black visor and a silver blade and finishing move versions that are a mask with yellow eyes and sword with a translucent yellow blade. As a bonus, Premium Bandai included replicas of the Heavenly Treasure Lai-Lai Jewels to everyone that reserved an order of Dairen'oh.

The Super Sentai Artisan Won Tiger features light and sound gimmicks like the original, with added lights to its tiger eyes and newly recorded sound clips and Won Tiger's theme song.[7] Articulation at the elbows has been added and details such as the "bi" (び) on the shoulders and the Kiba Ranger emblems on the paws have been molded and painted rather than being recreated as stickers. The package includes two miniature Kiba Ranger figures, background displays for Dairen'oh's and Kibadaioh's finishing moves, and two sets of the 7 Legendary Chi Treasure Pearls, one set with kanji and one set without. As with Dairen'oh, Premium Bandai sent the Won Tiger Heavenly Treasure Lai-Lai Jewel to everyone that reserved an order. 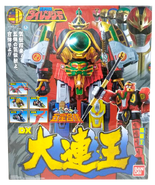 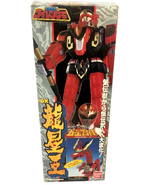 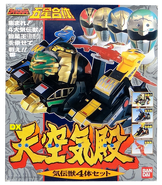 DX Daijinryuu
Add a photo to this gallery

Bandai Japan released the traditional 4.5" Chogokin figures of the Dairanger team during the show's airing. Each member is packaged separately and includes a Star Cutter and Star Sword, while Kiba Ranger comes with his armor and Byakkoshinken.

Five sets of Dairanger figures with their personal Kiber Machines. Each package includes a Star Sword, DaiBuster, and a Dairen Rod with five attachments.

Super Voice Heroes (超音英雄 (スーパーボイスヒーロー), Sūpā Boisu Hīrō) are action figures with light and sound gimmicks manufacturered by Bandai. Each has three voice clips that's activated by pressing the belt buckle. The figures measure about 24 centimeters tall and include sidearms.

Released through 1992 and 1993, the Sentai Robo Collection (戦隊ロボコレクション, Sentai Robo Korekushon) was a line of 8.5 cm die-cast figures of the then-current and past Sentai robots. Dairen'oh and Ryuseioh were included in the second wave.

Super PlaDelu Dairen'oh (スーパープラデラ 大連王, Sūpā Puradera Dairen'ō): A figure of Dairen'oh with light and sound gimmicks. The legs can be removed and transformed into their Mythical Chi Beast forms. An image of the Dairangers is visible behind the green jewel on its chest. The included accessories are the Dai Javelin and Great King Sword.

In 2013, Bandai Japan released Ryu Ranger and Kiba Ranger as part of the S.H. Figuarts line. No other Dairanger figures were produced. Ryu Ranger comes with a large amount of accessories which include six pairs of replacement hands, holster versions of the Star Sword and Star Cutter, full sized Star Sword and Star Cutter, DaiBuster, Dairen Rod, Dairinkin, Dairinken with blade, and an Akibaranger Season Tsuu version of Ryuu Ranger's helmet. Kiba Ranger includes few accessories in comparison, with only one pair of replacement hands, Byakkoshinken's hilt and two different length blades, and a replacement Kiba Tector emblem with the Akibaranger logo.

The Kiba Ranger figure was also released by Bandai America as the White Ranger for Mighty Morphin Power Rangers' 20th anniversary. A different version was later released that features a head sculpt of Tommy Oliver and additional replacement hands.

Gold Dairen'Oh (ゴールド大連王, Gorudo Dairen'ō): A gold-plated DX Dairen'oh set that was a prize of a drawing held by Terebi-kun Magazine. It was awarded to two entrants. A gold version of Ryuseioh was also awarded to three entrants.

Retrieved from "https://powerrangers.fandom.com/wiki/Dairanger_(Toyline)?oldid=879637"
Community content is available under CC-BY-SA unless otherwise noted.