Daimon Tatsumi (巽 大門, Tatsumi Daimon)/GoYellow (ゴーイエロー, Gō Ierō) is the 21 year old (22 in Timeranger vs. GoGoFive, 23 in Gaoranger vs. Super Sentai, and 33 in Gokaiger) fourth and last son of the Tatsumi family who is a Capital Police Force Sergeant.

Daimon is the hot head of the group, who rushes into things before thinking and getting into trouble. Anguished at his brother, Nagare, for being put on suspension for something that was not his fault Daimon sticks up for him.

Daimon is somewhat the joker of the team, being the youngest male he can be pretty reckless and cocky. Daimon has to learn to be a team player, one of the reasons why he is always yelled at by Matoi is because he thinks he can handle any situation on his own without his siblings' help.

Matoi tells him that they are all a team to win a fight they have to work together, he cannot let his pride get in the way of saving the world. Then when the team works together they are far greater and more powerful than working alone. A lesson that Daimon learns the hard way. He can be somewhat indulgent.

Once he is angered the Saima Clan better watch out, as he has a very deadly temper. Although he might rush into a fight he can still be reliable in an emergency. A wannabe bike cop, he is the only sibling not in the Fire Department.

Obsessed with drinking milk, as in his return in Gaoranger vs. Super Sentai, Daimon taught Kai Samezu (GaoBlue) how to perform his famous "Banba-Style Cow's Killer Milk Tornado Drop" ("Banba Hissatsu Ginyu Tatsumaki Otoshi"), which Kai eventually uses on Lost Highness Rakushaasa. He also lectured Kai on the Super Sentai franchises' technical warriors. Although his elder brother Matoi appeared with the other Reds, the two did not interact.

Daimon's appearances in the "Versus Series", GoGoFive vs. Gingaman, Timeranger vs. GoGoFive, and Gaoranger vs. Super Sentai, are featured in the Super Sentai Versus Series Theater, hosted by the heroes of Tensou Sentai Goseiger. Moune (Gosei Yellow) also dresses as Daimon in the GoGoFive cosplay.

Years later, Daimon fought alongside not only his own team, but every single Sentai ranger in existence, against the Empire of Zangyack when it attacked the Earth in the Great Legend War. After fighting against hundreds of Gormin and their Sugormin commanders. Akarenger noticed the fleet moving towards them, he gathered all the Rangers together and gave them the order to sacrifice their powers to wipe out the first invasion's armada. The GoYellow powers are later utilized by Luka Millfy via the Ranger Keys.

After the defeat of Ackdos Gill, Captain Marvelous returned all the Ranger Keys to the former Sentai heroes. It is assumed Daimon received his key alongside his older brother Shou, allowing for the Tatsumi siblings to utilize their abilities once again.

Daimon, alongside his team, among the majority of the Super Sentai heroes, was caught up in the "Super Hero Taisen" incident which eventually resulted in the Super Sentai teams and Kamen Riders joining forces to defeat both Dai-Zangyack and Dai-Shocker. During the final battle, he is seen with GoRed fighting a Dogormin.

GoYellow appeared with his team among the first 38 Super Sentai whom collectively empowered Wild Tousai Shuriken King in its fight against the titanic Gillmarda, granting the Ninningers and Zyuohgers the power to perform the Zyuoh Ninnin Super Sentai Burst which destroyed Gillmarda with the combined power of all 40 Super Sentai.

Daimon joined the Super Sentai Strongest Battle as a member of Police Team. It’s unknown whether he participated in any of the matches, but his team lost the competition either in the first round against the Water Warrior Team offscreen or won against them and lost in the second round against Super Strong Team offscreen. 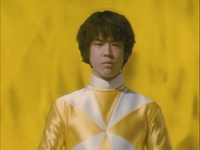 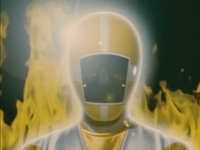 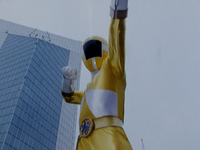 The GoYellow Ranger Key (ゴーイエローレンジャーキー, Gō Iero Renjā Kī) is Daimon Tatsumi's personal Ranger Key and what became of his powers after he along with the rest of the 34 Super Sentai sacrificed their powers to end the Great Legend War.

This key along with the majority of the Ranger Keys were collected by the Red Pirates and later used by the Gokaigers. The GoYellow Ranger Key was mainly used by Luka Millfy (Gokai Yellow), who used it to fight as GoYellow.

The GoGoFive keys, along with all the Ranger Keys of the first 33 Super Sentai, were briefly taken by the Black Cross King and turned into Ranger puppets that were fought by the Gokaigers and the Goseigers. Splitting up, the puppet GoYellow was defeated as part of a group of surviving Yellow warrior keys by Gokai Yellow and Super Gosei Yellow.

After Zangyack were finally defeated, the Gokaigers gave the Ranger Keys back to their rightful owners. Daimon received his key and became GoYellow once more.

A female version of GoYellow in Gokaiger.

Daimon Tatsumi/GoYellow: to be added

GoYellow is among the vast pantheon of Rangers which are available in the mobile game Super Sentai Battle Base.

GoYellow appears with his team among all Sentai in the mobile game Super Sentai Legend Wars.