"Curse you, Kakuranger! I will not go! I will not forget this! As long as humans exist, we will be reborn! We will!!"
―Daimaou's final words before his Seal[src]

Millennia ago, Daimaou attacked the humans with his Yokai minions before three holy men, the original forms of the Three God Generals, developed the Shinobi spell that trapped Daimaou in the Demon-Seal Gate, with the Yokai turning to Nurarihyon prior to suffering the same fate years later. In the present, Daimaou has his son Gashadokuro set up preparation for his coming into the human world by using the souls of 15 human beings to begin the ritual which would last a whole month.

He was later revived by his son's demise. His base of operations was a giant flying Skeleton Castle with wing-like ears. He later declared the Time of Darkness, creating Daradara to aid him to drown the world in darkness before Daradara was destroyed.

After his brother and sister were killed, Daimaou was the only Yokai left to deal with the Kakurangers. However, Daimaou, being the embodiment of all evil, could not be destroyed, lest his influence spread worldwide. In the finale, when he grew giant, the Three God Generals and Ninjaman used their powers to shrink him, allowing the Kakurangers to seal him back into the cave where the other Yokai were entombed. 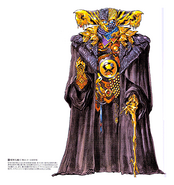 Daimaou Concept Art
Add a photo to this gallery

Retrieved from "https://powerrangers.fandom.com/wiki/Daimaou?oldid=1049515"
Community content is available under CC-BY-SA unless otherwise noted.