Daijinryuu (大神龍, Daijinryū, Great God Dragon) is a giant dragon who was created by the universe to preserve the natural balance of the cosmos. According to Kameo, the reason for his appearance is to stop the human race's foolish conflict by destroying the Earth. Because of this neutral standpoint, he will kill anyone, innocent or guilty, if he deems them a threat to the universal balance.

Similar to the Mythical Chi Beast RyuseiOh, Daijinryuu largely resembles a Chinese dragon. While traversing the universe, it appears serpentine as it flies. It also has the ability to reconfigure itself into a more bipedal form, where its knees reverse and its shoulders shift upwards into a more humanoid configuration.

First appearing during the Dairangers' battle with Great Famous Pachinko Player, Ep. 37: You Have to See It!! A Huuge Guy Daijinryu destroyed most of Tokyo before moving on to attack other cities across the world, including the Gorma Palace. Returning to Tokyo when the Dairangers and Pachinko Player resumed their battle, Daijinryuu crushed the Gorma warrior beneath his foot before blasting DairenOh apart. As Kameo transformed into Daimugen and took RyuseiOh into his shell to protect him, Daijinryuu attempted to crush him underfoot as well, but relented after Master Kaku and the Gorma Emperor negotiated a ceasefire, leading him to return to space. Ep. 38: Huh!! A Ceasefire!?

A short while later, Daijinryuu returned to Earth after sensing the immense power of Akomaru's demon bodyguard Ikazuchi. Ep. 42: A Straight Line To Mommy Deciding to eliminate the root cause of the conflict, Daijinryuu enchanted the citizens of Tokyo to jump off the edge of buildings to their deaths, Ep. 43: The Ultra-White Prohibited Past requiring Master Kaku to use his Kiryoku to save them. Satisfied that his point had been made, Daijinryuu left and Kaku decided to disband the Dairangers rather than risk another confrontation. Ep. 44: Impression!! You Cry Too

During the Dairangers' final battle with Shadam, Daijinryuu returned a third time and sought to kill both the Gorma and the Dairangers by destroying the Gorma Palace. Ep. 49: I-i-i-it's The Final Decisive Battle After both the Earth Shaking Jewel and the Lai-Lai Jewels were scattered by the spirit of Master Kaku, Ryo ended the conflict by killing Shadam which led to Daijinryuu finally leaving Earth for good. Final Ep.: Let's G-o-o-o! 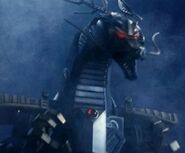 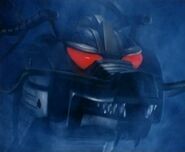 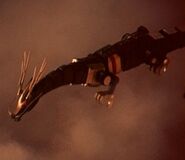 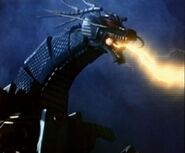 Daijinryuu breathing fire
Add a photo to this gallery

Retrieved from "https://powerrangers.fandom.com/wiki/Daijinryuu?oldid=961812"
Community content is available under CC-BY-SA unless otherwise noted.