Ep. 1: Take the Express to the Super Fortress

A circus acrobat who teaches yoga and gymnastics at the Athletic Club and loves anpan.

Daigoro and his team joined up with the other nine Sentai to stand behind the newest Sentai, the Turborangers, as they faced off against the Hundred Boma Tribes.

DenziBlue is among the Sentai warriors seen in clips when Daimon Tatsumi (GoYellow) lectured Kai Samezu (GaoBlue) about the past Sentai technical warriors and their fighting spirit.

Years later, Daigoro fought alongside not only his own team, but every single Sentai Ranger in existence, against the Empire of Zangyack when it attacked the Earth in the Great Legend War. After fighting against hundreds of Gormin and their Zgormin commanders. AkaRenger noticed the fleet moving towards them, he gathered all the Rangers together and gave them the order to sacrifice their powers to wipe out the first invasion's armada. The DenziBlue powers are later utilised by Joe Gibken via the Ranger Keys.

After the Legend War, Daigoro encountered the Gokaigers twice during their own journey.

The first time was in Gokaiger Goseiger Super Sentai 199 Hero Great Battle, where he gives the team the Denziman Greater Power. He also ends up meeting fellow Sentai alumni Ryo of the Heavenly Fire Star and Koume "Umeko" Kodou through the encounter.

Daigoro encountered them again in Kaizoku Sentai Gokaiger vs. Space Sheriff Gavan while he met with Shirou Akebono of Battle Fever to talk with him. After the Gokaigers and Gavan's battle ended, A mysterious voice asked that he, Retsu, and Shirou Akebono transform one last time. Don Dogoier and Joe gave Daigoro and Shirou their respective Ranger Keys. After they were handed the Keys, the three transformed and roll called. After that, Gai Ikari began hounding them for autographs.

After the Zangyack's final defeat, Marvelous returned the Ranger Keys to their original owners. It is assumed Oume and his team have their powers again and will continue their duties as the Denziman.

Daigoro, alongside his team, among the majority of the Super Sentai heroes, was caught up in the "Super Hero Taisen" incident which eventually resulted in the Super Sentai teams and Kamen Riders joining forces to defeat both Dai-Zangyack and Dai-Shocker.

DenziBlue appeared with his team among the first 38 Super Sentai whom collectively empowered Wild Tousai Shuriken King in its fight against the titanic Gillmarda, granting the Ninningers and Zyuohgers the power to perform the Zyuoh Ninnin Super Sentai Burst which destroyed Gillmarda with the combined power of all 40 Super Sentai.

Alongside DenziGreen, DenziBlue was a candidate to join the Space Squad 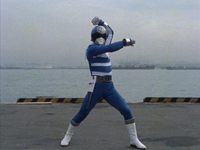 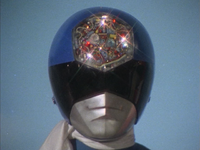 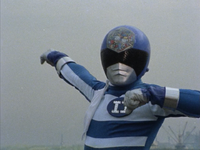 The DenziBlue Ranger Key (デンジブルーレンジャーキー, Denji Burū Renjā Kī) is Daigoro Oume's personal Ranger Key and what became of his powers after he along with the rest of the 34 Super Sentai sacrificed their powers to end the Great Legend War.

This key along with the majority of the Ranger Keys were collected by the Red Pirates and later used by the Gokaigers. The DenziBlue Ranger Key was mainly used by Joe Gibken (Gokai Blue), who used it to fight as DenziBlue.

When Daigoro and Shirou Akebono (Battle Kenya) were informed by the Gokaigers that Space Sheriff Gavan had been captured and taken to Makuu Space, they suggested that they use their Ranger Keys to open the gateway to Makuu Space. Joe used the DenziBlue key, while Don (Gokai Green) used the Battle Kenya key alongside him to open the gateway. After Gavan was rescued, a mysterious voice requested that the three of them (who happened to look alike) transform. Daigoro and Shirou were temporarily given their keys back to transform alongside Gavan.

After Zangyack were finally defeated, the Gokaigers gave the Ranger Keys back to their rightful owners. Daigoro received his key and became DenziBlue once more.

Daigorou Oume/DenziBlue: Until his entry into the Denshi Sentai, he was performing as an acrobat in a circus. Even when he becomes DenziBlue, he specializes in speed tactics.

DenziBlue is among the vast pantheon of Rangers which are available in the mobile game Super Sentai Battle Base.

DenziBlue appears with his team among all Sentai in the mobile game Super Sentai Legend Wars.