Daigo of the Heavenly Phantom Star

Daigo of the Heavenly Phantom Star ("天幻星" , "Tengensei" Daigo) is ShishiRanger (シシレンジャー, Shishi Renjā, Lion Ranger) of the Dairangers and the second-in-command to RyuuRanger. He is 24 years old (42 in Gokaiger). The most gentle member of the team, as well as the most serious of the group, he works at a pet shop and becomes romantically involved with Kujaku. He was scouted to be a Dairanger after Kaku's discovery of his Qi connection with Kujaku. He specializes in the Kung Fu form of Hung Ga and utilizes illusions in combat.

Daigo was twenty-four years old when the Gorma wars began again. He was the most remarkable, gentle member of the team. In the beginning, he was a bit sullen. He worked all the time at a small pet shop and loved living creatures.

When Shoji and Kazu were attacked by Key Jester's puppets, he was the only one who believed Shoji and Kazu. He faced off against Key Jester alone, and lost, resulting in Kaori's soul being stolen. This caused him to be angry at his teammates, until Master Kaku helped set them straight and they begin to take their roles as Dairangers seriously.

In episodes 9 and 10, it was Daigo whose soul was open to the signal from Kujaku, trapped for 6,000 years inside the Mirror Make-up Artist. He was instrumental in freeing her, but by that time he was already in love with her thanks to what Master Kaku had told him about her. In episode 16, he tried to convince her to become a gentle, kind person he heard she was before. She returned again in Episode 23, and they were trapped together. Seeing his determination and refusal to give up, she relinquished her anger and gave him her strength. He then learned that she was dying. She was determined to seek a legendary cure because he believed in her.

By Episode 34, he found a cactus that he once cared for and had lost. It had, he thought, a spirit haunting it. But it happened that the cactus was given a human spirit-form by General Cactus. She died saving him and truly became a ghost. In Episode 36, Daigo followed a news report that led him to a trapped Kujaku, and he and the team fought to help her in her quest for the cure. In Episode 41, he truly did lose Kujaku. It was this open connection that Kaku had felt before in Daigo that caused him to choose him to be a Dairanger.

Multiple copies of Shishiranger were created by Copy Empress using photos she took of the Dairangers. The first was a human clone created during a day at the pool; while a second was created alongside the first in order to double-team the respective Dairanger. A third was created in a team meant to face KirinRanger before he destroys all the clones with his RodArrow.

Later, Daigo, alongside his team, joined forces with the Fivemen, Jetmen, Zyurangers, and Kakurangers to defeat the evil Emperor Daidas and his forces.

ShishiRanger is among the Sentai warriors seen in clips when Daimon Tatsumi (GoYellow) lectured Kai Samezu (GaoBlue) about the past Sentai technical warriors and their fighting spirit.

Years later, Daigo fought alongside not only his own team, but every single Sentai Ranger in existence, against the Empire of Zangyack when it attacked the Earth in the Great Legend War. After fighting against hundreds of Gormin and their Zgormin commanders. Kaijou noticed the fleet moving towards them, he gathered all the Rangers together and gave them the order to sacrifice their powers to wipe out the first invasion's armada. The Shishi Ranger powers are later utilised by Don Dogoier via the Ranger Keys.

After the Gokaigers finally defeat Zangyack invasion force on Earth and the emperor, Marvelous returned all of the Ranger Keys to their original owners. since KirinRanger and TenmaRanger got their Ranger Keys back as they saw the Gokaigers off, it is assumed Daigo and the other Dairangers have their powers back.

Daigo, alongside his team (bar KibaRanger), among the majority of the Super Sentai heroes, was caught up in the "Super Hero Taisen" incident which eventually resulted in the Super Sentai teams and Kamen Riders joining forces to defeat both Dai-Zangyack and Dai-Shocker.

ShishiRanger appeared with his team among the first 38 Super Sentai whom collectively empowered Wild Tousai Shuriken King in its fight against the titanic Gillmarda, granting the Ninningers and Zyuohgers the power to perform the Zyuoh Ninnin Super Sentai Burst which destroyed Gillmarda with the combined power of all 40 Super Sentai.

, competing for the title of Kamen Sentai Gorider, with ShishiRanger as candidate for Midorider. However, the Dairangers were beaten in the first round by Team Ex-Aid

, with ShishiRanger being defeated by Kamen Rider Den-O Sword Form

Daigo joined the Super Sentai Strongest Battle as a member of Animal Lover Team. It’s unknown whether he participated in any of the matches, but his team lost the competition either in the first round against the Sports Team offscreen or won against them and lost in the second round against Leader Team offscreen.

As ShishiRanger, Daigo uses a variation of Hung Gar called Lion-First that enables him to generate mists to confuse opponents as well as to create life-like illusions to attack them. 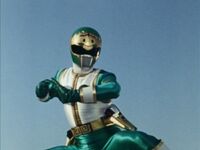 The ShishiRanger Ranger Key (シシレンジャーレンジャーキー, Shishi Renjā Renjā Kī) is Daigo's personal Ranger Key and what became of his powers after he along with the rest of the 34 Super Sentai sacrificed their powers to end the Great Legend War.

This key along with the majority of the Ranger Keys were collected by the Red Pirates and later used by the Gokaigers. The ShishiRanger Ranger Key was mainly used by Don Dogoier (Gokai Green), who used it to fight as ShishiRanger. It was also used by Luka Millfy (Gokai Yellow) on one occasion.

The Dairanger keys, along with all the Ranger Keys of the first 33 Super Sentai, were briefly taken by the Black Cross King and turned into Ranger puppets that were fought by the Gokaigers and the Goseigers. Splitting up, the puppet ShishiRanger was defeated as part of a group of surviving Green and Black warrior keys by Gokai Green and Super Gosei Black.

After Zangyack were finally defeated, the Gokaigers gave the Ranger Keys back to their rightful owners. It is presumed that Daigo received his key and became ShishiRanger once more.

A female version of the ShishiRanger suit as seen in Kaizoku Sentai Gokaiger.

Daigo of the Heavenly Phantom Star/ShishiRanger: to be added

ShishiRanger is among the vast pantheon of Rangers which are available in the mobile game Super Sentai Battle Base.

ShishiRanger appears with his team among all Sentai in the mobile game Super Sentai Legend Wars.