Daggeron is the Solaris Knight who wields the power of the sun and owns a feline genie named Jenji. Although not initially billed as a Power Ranger in-show, Daggeron identified with the Mystic Rangers and acted as their Six Ranger.

Daggeron is a very stern and no-nonsense warrior but fair. Despite his human appearance, he is actually one of the Ancient Mystics, the benevolent magical beings that the Mystic Rangers draw their powers from. He was trained by Leanbow and went missing for nineteen years after the end of the Great Battle due to sealing himself in a cave to prevent Calindor from escaping prior to being turned into a frog.

When Madison kisses the frog, Daggeron reassumes his human form once more. He has undertaken the task of training the Rangers in the use of their magic personally and is a very strict teacher, wanting the Rangers to reach their full potential.

Daggeron accepts Imperious' challenge at the Dimension of Wandering Souls to finish what they started 19 years ago but this is a trap and Imperious steals the Solar Streak Megazord's power in order to use a forbidden spell to create the Chimera, which seemingly destroys Daggeron. Thanks to Jenji, Daggeron survives and rides the mystical unicorn Brightstar to help the Rangers before settling things with Imperious for good in a Bound Battle to the death. Imperious cheats and wounds Daggeron but, through his determination and honor, Daggeron is able to destroy his old enemy.

When Udonna leaves to find Leanbow, he oversees the Rangers' activities until her return. He gains a new nemesis in Megahorn of the Ten Terrors, being almost killed by him in their first battle before playing a key role in bringing him down.

In the midst of the final battle, Daggeron is killed by Octomus the Master when fighting in the Mystic Mother's dimension, when he had his Solaris Knight powers stripped away and threw down Leanbow to avoid a barrage of energy tentacles the Master threw at them but was then fatally stripped of all of his magic. He was later revived by Necrolai at Leelee's behest and helped the Mystic Rangers in destroying Octomus once and for all. Itassis then approached Daggeron, seeking knowledge of honor. It can be presumed that, following the events of Mystic Force, he became a Mystic Master akin to the Snow Prince.

After an alien from Andresia named Orion comes across a Silver Ranger Key and a Morpher, Orion gets visions from multiples Sixth Rangers whilst touching the Morpher.

Orion calls out the power of all the Sixth Rangers, including Daggeron, in order to create the Super Megaforce Gold key. He also appears in the Legendary Final Strike during the first phase of the attack, attacking through the enemy with his Laser Lamp.

Daggeron returns with his fellow Mystic Rangers as part of the army of Legendary Rangers that help the Mega Rangers defeat the Armada once and for all, fighting in a huge battle against hundreds of X Borgs and dozens of Bruisers.

When Preston Tien reads The Encyclopedia Of Magic & Spells it contains a small bio on Chip Thorn and the others Mystic Force Rangers, Daggeron is mentioned as one of the magicians who defeated Octomus the Master.

Daggeron is shown in archive footage along with the other Mystic Rangers in Scrozzle's database when the villains are looking for a past villain to revive with the Reanimizer, and comes across Koragg. He is seen using footage from the fight against Gekkor.

Daggeron along with the other Mystic Rangers are among all the Ranger teams which appear in the Korean-developed mobile game Power Rangers Dash.

Solaris Knight is among the Rangers who are featured in Power Rangers Legacy Wars,he is a Legendary (Leader), Legendary (Assist) character ,,represents Mystic Rangers alongside Udonna and Leanbow.

Daggeron in his Ancient Mystic Mode appeared as a golden being with various wing-like appendages. 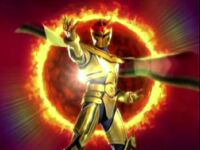 The Solaris Knight Ranger Key is Daggeron’s personal Ranger Key. This key along with the other 14 Official Sixth Ranger Keys are seen lining the Command Center's interior walls. This key is mainly used by Orion (Super Megaforce Silver) who uses it to fight as the Solaris Knight.